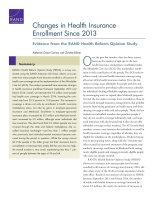 Changes in Health Insurance Enrollment Since 2013

RAND's Health Reform Opinion Study (HROS) allows for an estimation of how many people have become enrolled in all sources of health care coverage since the implementation of the Affordable Care Act (ACA). The HROS is conducted using the RAND American Life Panel, a nationally representative panel of individuals who regularly participate in surveys; this particular analysis, is focused on respondents age 18–64. In addition to asking them about their opinions of the ACA, each month RAND collected information about enrollment in health insurance, including employer-sponsored insurance (ESI), Medicaid, Medicare, insurance purchased on a marketplace, and other insurance purchased on the individual market. This detailed information about insurance coverage combined with the fact that the same individuals were surveyed each month provides a unique ability to track how insurance coverage has changed since the major health insurance coverage provisions of the ACA took effect on January 1, 2014. The analysis presented here examines changes in health insurance enrollment between September 2013 and March 2014; overall, the authors estimate that 9.3 million more people have health care coverage in March 2014, lowering the uninsured rate from 20.5 percent to 15.8 percent. This increase in coverage is driven not only by enrollment in health insurance marketplace plans, but also by gains in ESI and Medicaid. Enrollment in ESI plans increased by 8.2 million and Medicaid enrollment increased by 5.9 million, although some individuals did lose coverage during this period. The authors also found that 3.9 million people are now covered through the state and federal marketplaces — the so called insurance exchanges — and less than 1 million people who previously had individual-market insurance became uninsured during the period in question. While the survey cannot tell if this latter group lost their insurance due to cancellation or because they simply felt the cost was too high, the overall number is very small, representing less than 1 percent of people between the ages of 18 and 64.

This report results from the RAND Corporation's Investment in People and Ideas program. Support for this program is provided, in part, by the generosity of RAND's donors and by the fees earned on client-funded research. The research was conducted within RAND Health, a division of the RAND Corporation.