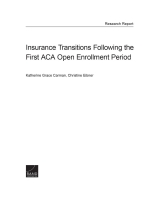 While most of the Affordable Care Act's (ACA's) coverage-related provisions took effect in January 2014, there is limited information on insurance transitions that occurred in the period before and after these changes became operational. In Insurance Transitions Following the First ACA Open Enrollment Period, the authors examine insurance transitions between September 2013 and November 2014 using longitudinal data from the RAND Health Reform Opinion Study, a part of the RAND American Life Panel (ALP). The ALP includes 2,953 respondents — ages 18 to 64, in a population-based sample — who were approached to participate in this data collection. Out of the 2,953 individuals, 2,329 (79 percent) responded in September 2013, and 1,972 (67 percent) responded in November 2014; 1,636 (55 percent) responded in both months, and 1,628 (55 percent) provided clear information about their source of insurance. The authors report the type of coverage people had before the law's major provisions took effect (September 2013) and at the end of the Marketplace enrollment year (November 2014). They estimate that 20.4 million nonelderly adults became newly insured and 7.4 million lost coverage, for a net increase of 12.9 million between September 2013 and November 2014. Among those previously uninsured, most (7.5 million) enrolled in Medicaid, followed by employer plans (7.3 million), the Marketplaces (3.1 million), and other insurance sources. Among those losing coverage, most (3.4 million) lost employer coverage, with the remaining insurance losses spread across a variety of coverage sources. The authors estimate that 7.6 million people enrolled in Marketplace plans; this includes the 3.1 million people who became newly insured in Marketplace plans and another 4.5 million people who transitioned to Marketplace plans from another coverage source. The majority of those insured at baseline (81 percent) experienced no change in source of coverage during the study period, suggesting that disruption from the law has been limited. The majority of Americans continue to be enrolled in employer coverage, and more gained coverage in employer plans than through the ACA's Marketplaces. These findings suggest that the ACA is expanding coverage through a variety of insurance sources, perhaps because the individual mandate is encouraging people to take up insurance offers that they might otherwise have declined.

The research described in this report was conducted by RAND Health.