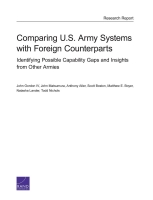 Identifying Possible Capability Gaps and Insights from Other Armies

Comparing U.S. Army Systems with Foreign Counterparts: Identifying Possible Capability Gaps and Insights from Other Armies provides the U.S. Army's Force Development and others an opportunity to contrast selected U.S. Army systems and capabilities with comparable foreign weapons. The sponsor of the research, G-8, Headquarters, Department of the Army, was interested in gaining insights into how various U.S. Army systems compared with similar foreign counterparts in order to identify possible capability gaps, as well as good ideas that other armies might have that the U.S. Army could consider adopting. Based on the time and resources that were available, the research focused on armored fighting vehicles, helicopters, rocket and cannon artillery, and various logistics platforms. The armies that were selected for the comparisons included U.S. allies as well as potential future opponents.

The organizing principle for the research was the Army's warfighting functions. These functions include movement and maneuver (air and ground), intelligence, fires (indirect), sustainment, mission command, and protection. The comparison of the Army's systems with their foreign counterparts was performed within this framework. The primary data used to develop comparisons were the on-the-record attributes of a system, such as the range of weapons and the munitions they fire, weight and protection levels of vehicles, carrying capacity of vehicles either in terms of numbers of personnel or cargo, and range and payload characteristics of helicopters. In addition to performing direct system-to-system comparisons, the research was able to identify crosscutting insights and issues that spanned several of the warfighting functions.

The U.S. Army Leads in Term of the Size and Capability of Its Helicopter Fleet, but Attack and Medium-Lift Helicopters Around the World Have Increased in Sophistication.

U.S. Rocket Systems Are Falling Behind the Increasing Range of Similar Russian and Chinese Systems.

Armies Have Added Considerable Capabilities to Their Infantry Squads, but the Weight That Infantrymen Carry Is Concerning.