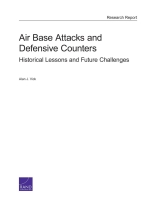 Air Base Attacks and Defensive Counters

Since the end of the Cold War, U.S. dominance in conventional power projection has allowed American airpower to operate from sanctuary, largely free from enemy attack. This led to a reduced emphasis on air-base defense measures and the misperception that sanctuary was the normal state of affairs rather than an aberration. The emergence of the long-range, highly accurate, conventional missile (both ballistic and cruise) as a threat to air bases is now widely recognized in the U.S. defense community, and, with that recognition, there is a growing appreciation that this era of sanctuary is coming to an end. Consequently, there is renewed interest in neglected topics, such as base hardening, aircraft dispersal, camouflage, deception, and air-base recovery and repair.

This report is intended to provide a reference on air-base attack and defense to inform public debate, as well as government deliberations, on what has become known as the anti-access problem, specifically as it applies to air-base operations. The report explores the history of air-base attacks in the past century and describes the American way of war that emerged after the fall of the Soviet Union. It then argues that emerging threat systems are disruptive to this way of war and will require new concepts of power projection. Finally, the report identifies five classes of defensive options that have proven valuable in past conflicts and offers recommendations on how best to win the battle of the airfields.

Air-Base Attacks Persist, but Their Nature Has Changed

The research described in this report was conducted within the Strategy and Doctrine Program of RAND Project AIR FORCE.