Under contract with Charlotte, North Carolina, the authors evaluated three of the six policing and public-safety recommendations in the city's SAFE Charlotte: Safety and Accountability for Everyone report. The authors recommend two pilot programs: a team of clinicians to provide services to address substance abuse, mental health, and homelessness and a model that would delegate low-risk, low-priority calls to nonspecialized civilian responders. 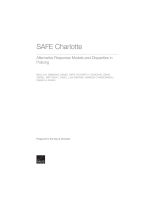 Under contract with Charlotte, North Carolina, the authors evaluated three of the six policing and public-safety recommendations in the city's SAFE Charlotte: Safety and Accountability for Everyone report. Recommendation 2 is about developing ways to implement a civilian response for low-risk duties. Recommendation 3 requested independent analysis of police–community member contact to determine the extent to which racial/ethnic bias is evident in policing in Charlotte. Recommendation 4 states that Charlotte's Community Policing Crisis Response Team should be expanded, and a specialized civilian responder model should be explored for those experiencing mental health crisis and homelessness.

The authors recommend two pilot programs: (1) a new team of clinicians who would deploy in pairs to provide services that could help address substance abuse, mental health, and homelessness and (2) a program that would delegate low-risk, low-priority calls to nonspecialized civilian responders. The estimated costs for the clinician team pilot would be approximately $850,000 for the first year. The estimated costs for the pilot of civilian responders for low-risk, low-priority calls would be approximately $1.4 million to $1.85 million for the first year. Local stakeholders should be involved in every aspect of development and implementation of all potential programs — from hiring to uniforms. The authors analyzed stop data, arrest data, and complaint data and found that Black residents in Charlotte were more likely to be stopped both as a driver and as a pedestrian and, when stopped, were more likely to be arrested.

The research described in this report was prepared for the City of Charlotte, North Carolina and conducted by the Justice Policy Program within RAND Social and Economic Well-Being.