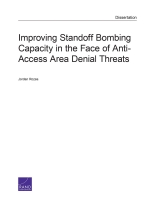 The threat environment of the 21st century consists of increasing numbers of advanced anti-access/area denial (A2/AD) defense systems which place significant pressure on the current United States Air Force (USAF) bomber fleet. In a scenario with A2/AD systems, conventional USAF bombers will likely be relegated to a standoff role. The ability of the current bomber inventory to handle the challenges of stressing combat scenarios remains in question. This research seeks to address the issue of whether or not there is a capability gap given certain threat scenarios and how the Air Force could allocate resources to alleviate this potential capability gap. The primary aircraft alternatives considered are commercial-derivative and military cargo-derivative arsenal aircraft. Demand for and effectiveness of arsenal aircraft alternatives are assessed through parametric and exploratory analysis. Costs are analyzed using multivariate regression analysis and cost analogies. These methods provide cost-effectiveness comparisons among a variety of USAF policy options. Meeting warfighting demands highlighted in this report would be well served by developing new types of cruise missiles and procuring them in sufficient quantities. Improving weapon effectiveness will significantly decrease target demand by a factor of up to 5.6, varying by target set. If arsenal aircraft are procured to deliver these standoff weapons, the C-17 is the most cost-effective option due to avoidance of development costs, although there would be penalties incurred for reopening the production line. The B-1 and B-52 aircraft should be replaced early to eliminate high operating costs associated with the aging fleet. Using existing cargo aircraft (C-130, C-17, and C-5) for these missions as dual role aircraft yields minimal costs compared to procuring new aircraft.

This document was submitted as a dissertation in September 2015 in partial fulfillment of the requirements of the doctoral degree in public policy analysis at the Pardee RAND Graduate School. The faculty committee that supervised and approved the dissertation consisted of James S. Chow (Chair), Fred Timson, and Christopher A. Mouton.