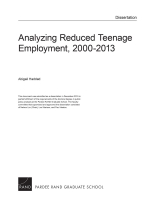 Because the evidence for the importance of working as a teenager on later employment outcomes and contribution to family finances is weak, public policy should not focus on getting teenagers in general to work. Instead, youth employment programs should focus specifically on the subset of teenagers who are disengaged from work and school. These teenagers differ in a variety of ways from their more-engaged peers. Among existing programs, there is significant variance in both degree of targeting and the extent to which program evaluation is occurring. The low-hanging fruit in terms of policy improvement is better evaluation of existing youth employment programs, with results informing funding.

This document was submitted as a dissertation in December 2015 in partial fulfillment of the requirements of the doctoral degree in public policy analysis at the Pardee RAND Graduate School. The faculty committee that supervised and approved the dissertation consisted of Nelson Lim (Chair), Lou Mariano, and Paul Heaton.