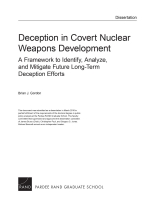 On the second day of the Gulf War in 1991, U.S. defense officials claimed that air strikes the previous night had dealt a crippling blow to Iraq's small nuclear weapons program, though later analysis would find the program to be much larger than, and not as damaged as, it appeared. In March 1993, the South African government announced that it had not only researched the means to build nuclear weapons, but had in fact constructed a handful of the devices and then voluntarily disassembled them — all without the international community becoming aware of the weapons' existence. The Indian government would also surprise the world several years later, in May 1998, when they conducted a nuclear test of which U.S. officials first learned through CNN coverage.

In each of these cases, U.S. officials were aware of the state's desire for nuclear weapons and its potential capability to build them. That awareness was not accompanied by an understanding of the state's motivations for pursuing nuclear weapons, its intentions for their use, or the success the state was having in research and development (R&D). A lack of complete knowledge is understandable due to the extreme secrecy that surrounds such efforts. But each of these programs was protected by more than secrecy. Each involved a coordinated deception effort that spanned years, involved thousands of individuals, and confused the efforts of U.S. analysts to present policymakers with timely and accurate information.

Intelligence analysts, military planners, and scholars often define deception in strategic, operational, or tactical terms. This dissertation proposes that the long-term deception surrounding these R&D efforts is distinctive in its characteristics and calls for new methods mitigate its effects. A framework will be presented that allows an analyst to categorize observable signatures, formulate a judgement on whether long-term deception is taking place, and propose additional areas of collection that may yield evidence of R&D. Historical cases of non-nuclear and nuclear weapons R&D programs will be used to develop and test hypotheses related to the characteristics of long-term deception.

Though focused in this dissertation on nuclear weapons R&D, the analytical approach taken and the hypotheses identified are applicable to other forms of long-term deception as well. The goal of this study is to give analysts in any discipline an additional tool to categorize information and spot common themes that indicate deception. An understanding of common uses of deception, its coordination, and the observables that may reveal such deception will assist intelligence collection and analysis that seeks to identify covert nuclear weapons programs, and officials who require accurate and reliable information on such programs to develop sound policy.

This document was submitted as a dissertation in March 2016 in partial fulfillment of the requirements of the doctoral degree in public policy analysis at the Pardee RAND Graduate School. The faculty committee that supervised and approved the dissertation consisted of James Bruce (Chair), Christopher Paul, and Gregory S. Jones. Michael Bennett served as an independent reader.