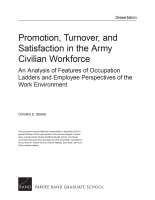 Promotion, Turnover and Satisfaction in the Army Civilian Workforce

Every organization is inherently interested in optimizing its talent pool; as an employer, the government is no exception. Retaining the workforce's highest-performing employees maximizes the return on an employer's financial investment in these individuals. Promotion can be a retention tool, while occupations that lack promotion opportunity may cause high performers to leave in search of new employment.

Using quantitative methods, the analysis provides insights on how promotion and turnover are associated with features of the occupation ladder and work environment. Specifically, the analyses reveal that a one standard deviation increase in expected promotion opportunity is significantly correlated with a 1.72 (GS11), .81 (GS12), .36 (GS13), and .19 (GS14) percentage point increase in actual promotion rates; a moderate effect size given that the average promotion rate in GS-11 is 8.9 percent and GS-14 is 2.2 percent.

While there is evidence in the literature that promotion opportunity is related to turnover, and that support from supervisors is related to turnover, more data are needed to corroborate these initial findings before large-scale policy changes are considered. Instead, the Army may consider low-cost interventions to limit potentially undesirable turnover. For example, the Army may consider creating a mechanism for employees to voice concern about promotion opportunity via an employee's Individual Development Plan (IDP) or an initial training for new supervisors outlining best practices for supporting direct reports.

This document was submitted as a dissertation in December 2018 in partial fulfillment of the requirements of the doctoral degree in public policy analysis at the Pardee RAND Graduate School. The faculty committee that supervised and approved the dissertation consisted of of Lawrence M. Hanser (Chair), Shanthi Nataraj, Gery Ryan, and Curt Gilroy (outside reader).