Nigeria is an important oil producer, but security shortfalls impede oil production and new investment. Important new finds of oil and natural gas have been reported in the territorial waters of Nigeria and nearby nations. Making the offshore petroleum infrastructure more secure would promote additional oil field investment, leading to greater production. The U.S. Air Force has expertise that could help build local security capabilities. 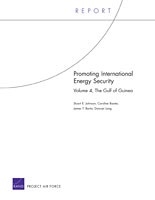 Volume 4, The Gulf of Guinea

The Gulf of Guinea is an important source of petroleum for the world market, with Nigeria being the dominant producer in this region. Nigeria's oil infrastructure has been subject to frequent attacks, causing production to be well below capacity. Moreover, investments in oil-producing infrastructure are lower than they would be in a secure environment. Oil production has been moving offshore in Nigeria. This trend is likely to continue, based on recent finds in Ghana's waters and off-shore exploratory activity in nearby nations. It is in the interests of the United States, as well as other oil importing nations, to encourage greater production and investment that would raise petroleum output in Nigeria and in the other Gulf of Guinea nations with crude oil reserves. While offshore fields have their own security issues, they are more visible from the air, yielding a potentially powerful role for aviation forces. This provides an opportunity for the U.S. Air Force to contribute to improved regional energy security through partnerships that would build local capabilities to secure offshore infrastructure. Nigeria is the most obvious partner and, despite challenges, has good reason to partner with the United States because the majority of the country's wealth lies in its hydrocarbon sector. But other alternatives are possible, such as working first with other nations in the region, such as Ghana, where governance is considerably better. The U.S. Air Force could then draw on lessons learned from such partnerships and best practices to partner with other countries in the region.

Partnering with the Nations of the Gulf of Guinea: Nigeria

Partnering with the Nations of the Gulf of Guinea: Alternatives