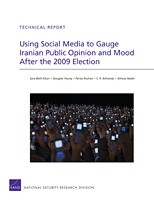 In the months after the contested Iranian presidential election in June 2009, Iranians used Twitter — a social media service that allows users to send short text messages, called tweets, with relative anonymity — to speak out about the election and the protests and other events that followed it. The authors of this report used an automated content analysis program called Linguistic Inquiry and Word Count 2007 (LIWC) to analyze more than 2.5 million tweets discussing the Iran election that were sent in the nine months following it. The authors (1) identify patterns in word usage over the nine-month period and (2) examine whether these patterns coincided with political events, to gain insight into how people may have felt before, during, and after those events. For example, they compare how the frequencies with which negative sentiments were directed toward President Mahmoud Ahmadinejad, his election opponents, and President Barack Obama changed over time, and they track the way in which the use of swear words sharply increased in the days leading up to specific protests. Particularly in countries where freedom of expression is limited, automated analysis of social media appears to hold promise for such policy uses as assessing public opinion or outreach efforts and forecasting events such as large-scale protests.

This publication results from the RAND Corporation's Investment in People and Ideas program. Support for this program is provided, in part, by the generosity of RAND's donors and by the fees earned on client-funded research.