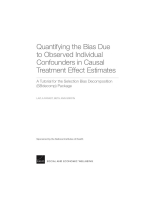 A Tutorial for the Selection Bias Decomposition (SBdecomp) Package

In this tool, the authors explain the methodology behind the primary function of the selection bias decomposition (SBdecomp) package; describe its features, syntax and how to implement the function; and illustrate its use with an example.

This tool will help analyze data when there is a substantive interest in identifying the variable or variables that explains the largest proportion of the estimated selection bias.

This research was funded by the National Institute on Drug Abuse and conducted by the Social and Behavioral Policy Program within RAND Social and Economic Well-Being.