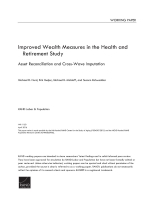 Improved Wealth Measures in the Health and Retirement Study

In this report, we present improved wealth measures for the Health and Retirement Study (HRS), which aim to reduce the effect of observation error on wealth levels and changes in wealth. The new wealth measures take account of the asset verification section in the HRS and use cross-wave information, most notably the value of the same asset in adjacent waves, in the imputation models, so imputed values better preserve serial correlation in the asset values. We document how we dealt with several methodological challenges in the implementation of these improvements. The corrections from the asset verification data reduce the standard deviations of wave-to-wave changes by substantial amounts (up to 57 percent for total wealth). The most important effect of the cross-wave imputations is a considerable reduction of the number of spikes and trenches (large changes in value followed by large changes back).

This paper series is made possible by the RAND Center for the Study of Aging and the RAND Population Research Center.