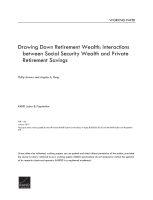 by Philip Armour, Angela A. Hung

Individual financial planning for retirement in the US is increasingly important, given the trend away from employer-provided defined benefit (DB) plans, the rising Social Security (SS) Full Retirement Age (FRA), and retiring baby boomers. A key financial decision that Americans make is how to draw on their retirement wealth across various sources, including both privately saved retirement funds and SS benefits. For SS retirement benefits, the main decision is at what age to claim, with claiming before the FRA resulting in lower monthly benefits, and claiming later leading to higher benefits. The terms of this tradeoff have changed in recent years: since 2003, the FRA has risen from 65 and will gradually increase to 67 by 2027, representing a drop in the present value of SS benefits. Meanwhile, defined contribution (DC) plans have gained in popularity, presenting retirees with more control over their private retirement wealth. The changing dynamics of both SS wealth and the private retirement decision space underscore the need for examining how individuals make decisions across their entire portfolio of retirement wealth. We use HRS survey data matched to SS administrative data to study how households integrate SS benefits into their general retirement income plans. We find starkly different non-SS retirement asset decumulation patterns across individuals who claim at different ages, with those claiming before the FRA drawing down pension and IRA wealth faster than those who claim at or after the FRA. However, the earliest claimants, those who claim SS retirement benefits exactly at age 62, are a highly heterogeneous group, consisting of both low-income, high expected mortality individuals as well as individuals with high pension holdings. We further find that this earliest claimant group is more likely to have retired and begun decumulating non-SS retirement assets even before age 62; however, this group's median and average assets are not substantially lower than later claimants. An analysis of claiming behavior by non-SS retirement wealth holdings shows that individuals with more retirement savings were overwhelmingly likely to claim between the ages of 62 and the FRA. On the other hand, those with the least retirement savings are more likely to either claim SS benefits as early as possible, either in the form of disability benefits or retirement benefits, or they would delay claiming SS retirement benefits until after the FRA. Moreover, birth cohorts facing higher FRAs tend to delay claiming SS retirement benefits on average; however, those most affected by this reduction in SS wealth — those with few other retirement assets — are the least reactive. Finally, households that do delay claiming as the FRA rises also tend to delay retirement and drawing down their non-SS retirement assets, indicating complementarity between SS and non-SS decumulation decisions and strong spillovers from changes in both SS and private retirement policy.

This study was conducted by RAND Labor and Population.