China's Yuan as a Reserve Currency: Boon or Bane for the Dollar? 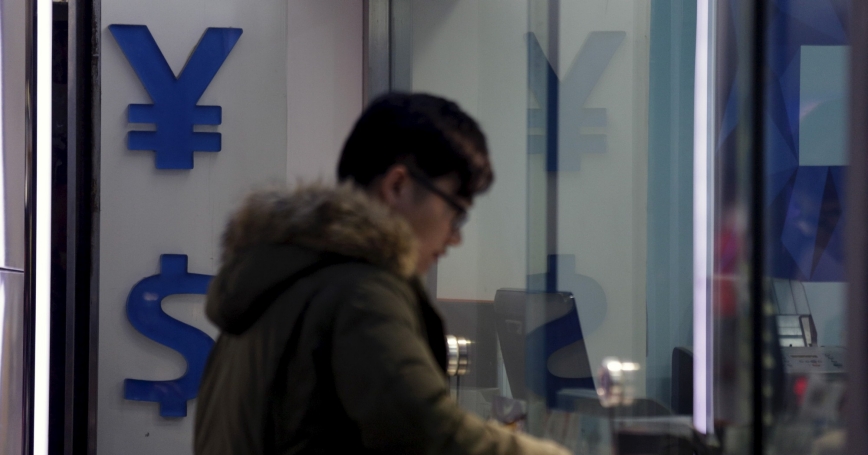 A man is seen next to signs of Chinese yuan and U.S. dollar at a foreign exchange store in Shanghai, January 8, 2016

The International Monetary Fund designated China's yuan—also called renminbi (RMB), or “People's Currency”—an IMF-accepted reserve currency in November. So holdings of yuan (along with previously designated holdings of dollars, euros, yen, and sterling) enable IMF-members to access special drawing rights (SDR) from the fund in the event of financial need.

Since the IMF designated it a currency enabling access to SDR, prospects for the yuan becoming a major reserve currency have actually receded, partly due to increased volatility generally roiling global financial markets but also through misguided Chinese policies. China's initial devaluation of the yuan was followed by further depreciation, a result of eased monetary policy fueling the surge of Shenzhen and Shanghai stock markets, burdening the economy with large internal debt, when authorities then invoked “circuit breakers” to suspend trading on the stock markets.

Nevertheless, in thinking about future global financial architecture, it's not too early to consider the following longer-term question: If the yuan were to share with the dollar the role of principal global reserve currency, would the relationship between the two currencies be conflicting or complementary?

A quick, intuitive answer would opt for the conflict side of the spectrum. Underlying this intuition is the notion that the dollar's role as principal reserve currency increases global demand for dollars and boosts the dollar's valuation relative to other currencies. Sharing this role with the yuan would lower the dollar's value, presumably harming U.S. interests.

But viewed through a wider-angle lens, a shared role for the yuan might actually have complementary as well as competitive effects on the dollar. To answer the question, let's start by scoping the size as well as the vulnerabilities of China's economy.

China's economy is, of course, large. Using market-based exchange rates, its GDP is $11.4 trillion, its annual trade is $2.2 trillion, but its cross-border financial transactions (as distinct from trade transactions) were only $600 billion in 2014–2015.

The yuan's small scale in international finance reflects the limited confidence that global markets have in the stability of China's financial institutions, including its central bank, four state banks (all among the world's five largest), 2,000 commercial banks, two equity markets in Shenzhen and Shanghai, and large, growing, but fragile “shadow” banking sector. To enhance the markets' confidence in the yuan will not only be difficult—it will entail a degree of transparency quite unfamiliar in China.

Recognizing the scale as well as the weaknesses of China's economy, the key idea underlying possible yuan-dollar complementarity can be summarized in three propositions linking domestic monetary policy both in the U.S. and China to the global currency role. Frequent and protracted recourse by the United States or China to “aggressive monetary policy” (AMP, defined below) often has serious destabilizing, disruptive, and unintended effects, both within the country pursuing AMP and in other (“third”) countries. If the dollar and the yuan were to share the role of dominant global reserve currency (rather than the current near-exclusivity for the dollar), recourse to AMP by either country would likely shift third countries' preferences to the other, more stable currency and thereby discourage AMP's frequency and disruptive effects. Establishing a system in which two reserve currencies compete with each other to affect global decisions about reserve holdings (specifically, about which of the competing reserve currencies is less prone to AMP) may therefore lead to greater financial stability than the present dollar-dominated system.

AMP's advocates—prompted by the Federal Reserve System's legislative mandate in the Federal Reserve Reform Act of 1977 to promote full employment as well as maintain stable prices—hope that contrived eased monetary conditions will stimulate a weak domestic economy. Notwithstanding this aim, AMP in the United States between 2008 and 2015 created severe distortions in U.S. and global capital markets. The policy has penalized and discouraged savings, and channeled bank lending to astute and nimble market players (for example, hedge funds, private equity funds, and a few active pension funds), rather than to longer-term business investments. AMP has lowered recorded unemployment in the United States not by expanding employment but by causing more working-age workers to withdraw from the labor market. As a result, the share of the eligible population remaining in the workforce is at its lowest in 30 years.

Easy money has also had disruptive, although unintended, spillover effects on the economies of other nations. For example, capital flows to and from other countries induced by eased U.S. monetary policy during 2008–2015 generated substantially increased volatility in the foreign exchange rates of eight prominent Asian nations (Korea, Pakistan, Malaysia, Indonesia, India, Philippines, Singapore, and Thailand). Sometimes their exports were depressed and imports encouraged by U.S. monetary policy, while other times their exports were stimulated and imports discouraged. Either way, throughout the years of AMP, efforts by these countries to pursue coherent economic policies of their own choosing were seriously impeded.

Consequently, third countries often resent and deplore AMP because its disruptive effects undermine their efforts to pursue consistent policies in their own economies. So, if policymakers in the country of one central bank reserve currency are deemed less likely to invoke AMP than those of another, the former currency is more likely to be preferred as a central bank reserve than the latter. If the role of principal central bank reserve currency is shared rather than predominated by one currency, each side would be less likely to invoke AMP, although both would retain the option of doing so. The global economy would—assuming other things equal—be more predictable and more stable.

From the U.S. perspective, sharing the dollar's central bank-reserve role with the yuan would be both a boon and a bane: a boon by reducing the frequency and distorting effects of easy monetary policy both at home and abroad; a bane because of abridgement of the benefits from the dollar's formerly exclusive reserve currency role. From the perspective of other nations, the shared role would look like an unalloyed boon.

This commentary originally appeared in The Weekly Standard on June 13, 2016. Commentary gives RAND researchers a platform to convey insights based on their professional expertise and often on their peer-reviewed research and analysis.