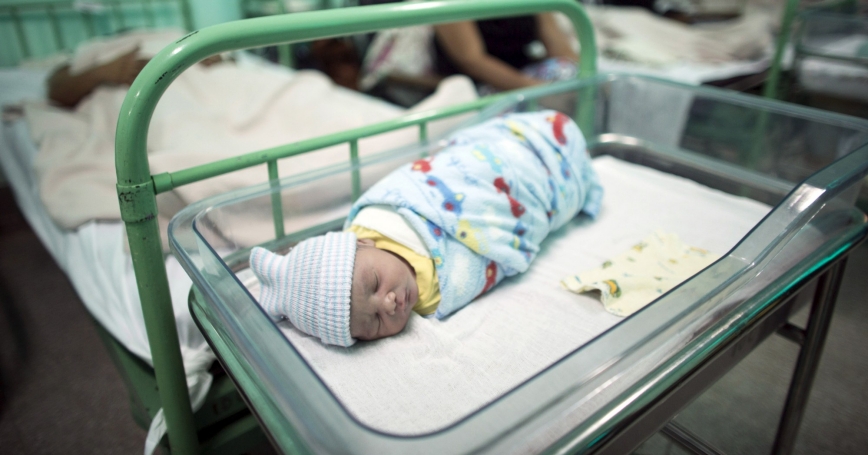 A newborn rests in Camaguey, Cuba, June 19, 2015, the week the WHO declared Cuba the first country to eliminate the transmission of HIV from mother to child

The United States' high health care costs do not yield corresponding health outcomes for its citizens. Conversely, Cuba, with less than a tenth of U.S. expenditures, has attained comparable outcomes on many indicators, particularly life expectancy and infant mortality.

This contrast raises the obvious question of how Cuba achieves these outcomes, a problematic question because multiple factors could contribute to the system's success. Regardless, the differences between the two countries' health care systems remain stark. Although Cuban health care providers have less access to technology and supplies, coverage is universal and the system is largely government-run, with the exception of the black market and medical tourism. Conversely, health care in the United States is not universal and consists of a disjointed, yet well-resourced mix of private and public providers and payers. Health system differences between Cuba and the United States likely account for much of Cuba's ability to do more with less.

It is unlikely that the United States will adopt socialized health care any time soon, but some of the Cuban system's distinguishing features might still provide useful lessons. In particular, the United States could do well to import lessons on prioritizing primary care and prevention as well as addressing social determinants of health.

Cuban medical schools incorporate primary care, public health, and social determinants in their curricula in ways that U.S. schools are just beginning to do.

In fact, Cuba's emphasis on primary care and prevention is a key differentiating feature of the two systems. Cuban medical schools, which are government-run and tuition-free, incorporate primary care, public health, and social determinants in their curricula in ways that U.S. schools are just beginning to do. Furthermore, the nationwide system of consultorios (family medical offices) and polyclinics play a central role in providing community-based medical and mental health services for all residents of defined geographic areas.

The Cuban consultorio comprises a doctor and nurse team who provides basic primary care services for 600–900 patients in both the office and patients' homes. Mornings are typically devoted to on-site care and afternoons to public health promotion, by collecting health statistics or visiting individual homes to address prevention, health education, and environmental factors affecting patients' health. Physicians are expected not only to conduct screenings and educate patients, but also to understand their family and social backgrounds. Since physicians focus on a residential area rather than on self-selecting patients, they are more likely to reach out (PDF) to those who typically avoid interaction with the health care system — an initiative much less common in the United States.

The set-up and structure of this geographic-based health care system ensures “that people [are] understood in all their dimensions: biological, psychological and social [and] as individuals, within families, and within their communities.” In surveying the environment or visiting patients' homes, physicians are able to assess the elements that constitute social determinants of health and thus tailor services to the specific needs of each community. They consider factors such as education, housing, environmental elements (e.g. sanitation and clean air), food and nutrition, and employment.

A polyclinic's ability to care for and respond to the needs of its citizens relies on the staff's knowledge and efforts in carrying out these responsibilities, which is grounded in the Cuban medical education system. All physicians enter this six-year training directly from high school, and are first educated as primary care practitioners. Later, those who wish to specialize must obtain a post-graduate degree. This policy resulted from a 1984 governmental shift that prioritized health promotion over sickness control. This change led schools to broaden providers' role as solely family physicians to “comprehensive general physicians.” While U.S. medical students typically acquire some basic epidemiological knowledge during their education, the Cuban health care system stresses the physicians' role to promote public health and their moral obligation to address health care disparities and inequalities.

Cuba's health system is far from perfect. Facilities often lack basic supplies or equipment, physicians receive poor compensation, and many providers defect when serving in foreign medical missions. Furthermore, some of the consultorio and polyclinic successes could be due to low residential mobility for both patients and physicians, resulting in sustained doctor-patient relationships. Additionally, many of the lessons from Cuba are difficult to transfer outside of its unique social context. Certain social determinants of health in the United States, such as economic stability, are less influential in Cuba because the government provides some food and other necessities.

The imperative for a stronger emphasis on social determinants of health in primary care in the U.S. has grown increasingly urgent.

However, the imperative for a stronger emphasis on social determinants of health in primary care in the United States has grown increasingly urgent. Undergraduate medical education has started to promote this focus, with the American Medical Association's adoption of a 2014 policy to integrate more training on this subject. Some of the adopted approaches (PDF) provide additional training and research to understand health disparities or address diversity in the medical education pipeline so that physicians more closely resemble the communities they serve. Furthermore, a few places also have adopted elements of community-based medicine and employ interdisciplinary teams to help address barriers to a healthy life.

The Morehouse School of Medicine in Atlanta implemented a required service-learning community health course in 1998. Students partner with an organization to conduct a health-needs assessment, identify a pressing community health issue, and then design and implement an intervention to address it. The needs identified often center on social determinants of health, such as housing conditions, available nutrition, and educational attainment.

Still, the United States has a relatively small number of medical schools actively seeking to expand the physician's role in understanding and addressing social determinants of health (PDF). Achieving the "triple aim" of affordable, high-quality health care that improves population health will require the medical field to better integrate this perspective into primary care provision. Lessons from the Cuban approach might help the United States achieve more with less.

This commentary originally appeared on Georgetown Journal of International Affairs on October 2, 2017. Commentary gives RAND researchers a platform to convey insights based on their professional expertise and often on their peer-reviewed research and analysis.