What Does Japan Think of the Iran Nuclear Deal? 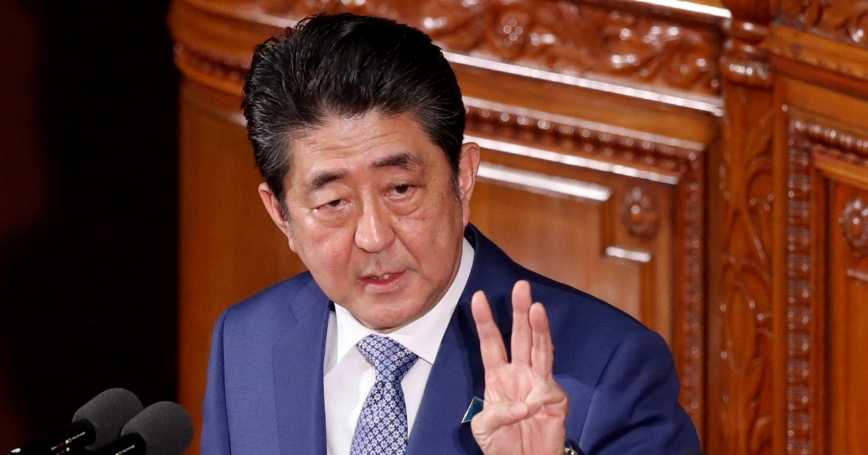 Japan's Prime Minister Shinzo Abe speaks at an opening of a new session of parliament in Tokyo, January 22, 2018

As the Trump administration's self-imposed May 12 deadline for improving or scrapping the Joint Comprehensive Plan of Action (JCPOA; also known as the Iran nuclear deal) grows nearer by the day, America's European allies have been exploring possibilities to save the deal, something U.S. observers have argued is important for preserving trans-Atlantic cooperation. Analysts are also beginning to think through what happens if President Donald Trump pulls out of the JCPOA.

What is Tokyo's view of the Iran nuclear deal and how has Tokyo responded to the U.S. threat to withdraw from it? What role is Japan, the world's third-largest economy, a major U.S. ally, and the only country ever to be attacked with nuclear weapons, likely to play in attempting to preserve, improve, or scrap the deal?

Under Prime Minister Shinzo Abe, Japan has put forward a foreign policy doctrine based on making “proactive contributions to peace” so as to sustain a “free and open Indo-Pacific (PDF).” Additionally, Japan has historically imported a substantial amount of oil and gas from Iran and was at one point one of the most important investors in the Islamic Republic's oil sector, meaning that the world's third-largest economy's ability to have an impact on Tehran's economic well-being is not insubstantial.

During the lead-up to the JCPOA's signing, Japan substantially reduced its oil imports from Iran in order to enhance pressure on the regime to enter negotiations over ending its nuclear weapons program. As the only nation in the world to be struck with nuclear weapons during wartime, and as a country that has suffered terror attacks domestically as well as lost citizens to the scourge of Islamist terrorism abroad, it is perhaps reasonable to think that Japan might play a big role in trying to preserve the deal. Alternatively, one might expect to see Japan urging the United States to scrap it if Abe agrees with Trump's view that the JCPOA is “the worst deal ever.” What is Japan's view of the Iran nuclear agreement?

Japan doesn't want the deal to fail, but it won't speak up forcefully to preserve it.

All available evidence suggests that Japan does not want to see the JCPOA fail, but also that it will not speak up forcefully to preserve the deal out of a concern for the potential damage doing so could inflict on its relations with the United States. Tokyo's low-key approach to date has been shaped primarily by three factors: its perception that Iran poses a minimal threat to Japan; its heavy security reliance on the United States; and its dependence on imported oil. Moreover, in light of its concerns over the rapidly worsening security environment in Northeast Asia, Tokyo is unlikely to change its stance in the months ahead.

While the Iran nuclear deal generated a great deal of debate inside the United States and elsewhere, including in Israel and Saudi Arabia, it resulted in almost no debate inside Japan. U.S. critics charged that the deal was flawed because while it dramatically reduces Iran's stockpile of highly enriched uranium and centrifuge architecture, it would not fully eliminate all aspects of Iran's nuclear program; because it contains sunset clauses that could conceivably position Iran to simply wait out the eight-to-15 year bans on aspects of nuclear activities; because it does not include a provision to eliminate Iran's ballistic missile programs; because it does not deal with Iran's appalling domestic human rights abuses, support for terrorism, assistance to the Assad regime in Syria, and subversion of regional governments in the Middle East; and because of the fear that Iran might find ways to divert or hide nuclear materials and activities from International Atomic Energy Agency inspectors.

In addition to these concerns, Israel worried that the JCPOA deal would end up “normalizing” Iran's role and reframe it as a partner in the eyes of the United States, France, Germany, and the U.K., who could come to see the deal as an accomplishment that they would be reluctant to see collapse if Iran engages in terrorism, offers support for the Assad regime, or backs paramilitary attacks on Israel.

By contrast, Japan does not perceive a threat from Iran, a country it has had diplomatic relations with for almost 90 years, and instead views the JCPOA as an important and successful instance of international arms control. Additionally, Tokyo also saw the deal as removing an obstacle to resuming valuable economic contacts with Tehran, largely in the realm of energy trade and investment.

While Japan has expressed growing concern about the threat of international terrorism since two of its nationals were beheaded by Islamic State in Syria in 2015 and others were caught in a terror attack in Dhaka, Bangladesh in 2016, the government's concerns have largely been about Sunni Islamist terrorist actors, not Shia groups.

And to date, Tokyo's major policy initiatives related to the Middle East have largely centered around debating the need to stand up an externally focused human intelligence service (PDF) to give advance warning and try to head off any attempts to target Japanese nationals (a proposal that some observers feel may be a case of usefully leveraging the outrage over the killings of Japanese nationals by foreign terrorists so as to establish an intelligence capability that might actually be more relevant, but also more diplomatically sensitive, in dealing with the threats to Japan posed by China and North Korea).

Japan's view of the Iran deal is heavily influenced by its reliance on the alliance with the United States.

Second, Japan's view of the Iran nuclear deal is heavily influenced by its reliance on the alliance with the United States. Japan depends on the U.S. alliance to deter or defeat any effort by China or North Korea to intimidate, coerce, or strike at it. China covets the Senkaku Islands and may have even broader designs on the Southwestern Islands, including potentially even Okinawa; while North Korea has kidnapped Japanese nationals, repeatedly tested missiles over Japan, and fired missiles into the Sea of Japan that it described as a practice run for an attack on U.S. military bases in Japan.

Not only does the United States extend to Japan a nuclear umbrella, it also forward-deploys U.S. Forces Japan, which includes over 54,000 members of the armed forces working in the U.S. 7th Fleet, 5th Air Force, III Marine Expeditionary Force, U.S. Army-Japan and I Corps (Forward), and other assets on Japanese soil. With so much forward-deployed combat capability, Japan serves as the cornerstone of U.S. force posture for deterrence and defense in the Western Pacific.

Additionally, Japan relies on the United States for—and in a few cases, serves as a critical partner in the joint development of—advanced military hardware, such as fifth-generation F-35 fighters (PDF) and ballistic missile interceptors like the Standard Missile-III Block 2A. In light of Tokyo's heightened concerns over the intentions of Beijing and Pyongyang, the Abe administration has chosen to downplay its diverging assessments of the implications of the JCPOA, including its view that walking away from the Iran nuclear deal would make reaching a denuclearization agreement with North Korea even harder by calling into question U.S. credibility.

Additionally, Tokyo is unlikely to publicly air its differences with Washington the way America's European allies have. While Foreign Minister Taro Kono expressed his “disappointment” that his “trustworthy” counterpart Secretary of State Rex Tillerson—who was known to favor improving the Iran nuclear deal rather than scrapping it—was removed, Japan's Chief Cabinet Secretary Yoshihide Suga made clear that Tokyo will not allow the change in personnel to affect the Abe administration's overall effort to stay close to the United States, in large measure out of a need to hug the Trump administration as closely as possible on North Korea policy. Whether this strategy will work or not remains unclear, since the U.S. administration appears increasingly likely to abandon the JCPOA, and Trump's decision to suddenly accept a North Korean summit offer left Tokyo “out in the cold.”

Finally, while not as important a factor as the two preceding points, it is nonetheless worth noting that Japan, given its dependency on imported sources of energy, has long regarded maintaining cooperative ties with all oil-exporting countries in the Middle East as an essential foreign policy goal. The priority accorded to this goal has grown as Japan has increasingly had to compete with China for energy resources (both in terms of imports and in terms of investments in upstream development), if not also for political influence.

It became even more essential in the wake of the March 11, 2011 “triple disaster” earthquake, tsunami, and nuclear meltdown that led Tokyo to take all 54 of the country's reactors offline; to date, only five are back in operation. Japan has had to find other ways to replace approximately 28.7 percent of its national energy needs, such as by burning more polluting coal, importing more oil and gas, and finding ways to reduce usage (such as by changing expectations about formal wear during the summer months, as exemplified by the expanded weeks when the collarless and tie-free “cool biz” fashion look has been permitted as formal office wear).

Still, while Japan continues to rely on the Middle East for energy, it has sought to diversify its oil import sources and shift its energy mix, leading to less sensitivity to concerns about harming ties with Iran (something that has facilitated an improvement in Israel's relations with Japan, for example).

The paradoxical reality is that while Tokyo regards the JCPOA as an important international agreement and fears that its destruction would be a historic mistake that would make a North Korea deal even more unlikely than it already is, it has not and in the future almost certainly will not speak out in favor of saving the deal for fear of alienating the Trump administration. Whether such an approach will succeed in keeping the U.S.-Japan alliance closely synchronized at a time when tensions in the trade realm are also threatening to strain the bilateral relationship remains to be seen.

Scott W. Harold is the associate director of the Center for Asia Pacific Policy and a political scientist at the nonprofit, nonpartisan RAND Corporation.

This commentary originally appeared on The Diplomat on March 26, 2018. Commentary gives RAND researchers a platform to convey insights based on their professional expertise and often on their peer-reviewed research and analysis.