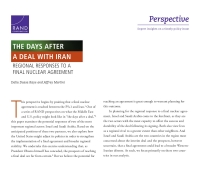 The Days After a Deal with Iran

One of a series of RAND perspectives on what the Middle East and U.S. policy might look like in "the days after a deal", this perspective begins by positing that a final nuclear agreement is reached between the P5+1 (the five permanent members of the UN Security Council plus Germany) and Iran and then examines the potential responses of two of the most important U.S. partners in the region: Israel and Saudi Arabia. The authors argue that because each partner's concerns about Iran run deeper than Tehran's nuclear program, both Israel and Saudi Arabia are not likely to welcome a final agreement. On the other hand, the authors do not anticipate that Israel and Saudi Arabia will adopt their most aggressive counters to the implementation of the final agreement: for Israel a military strike on Iranian nuclear infrastructure and for Saudi Arabia acquisition of its own nuclear deterrent. Furthermore, the authors present a range of measures the United States could employ to address the concerns of its partners and prevent destabilizing actions.