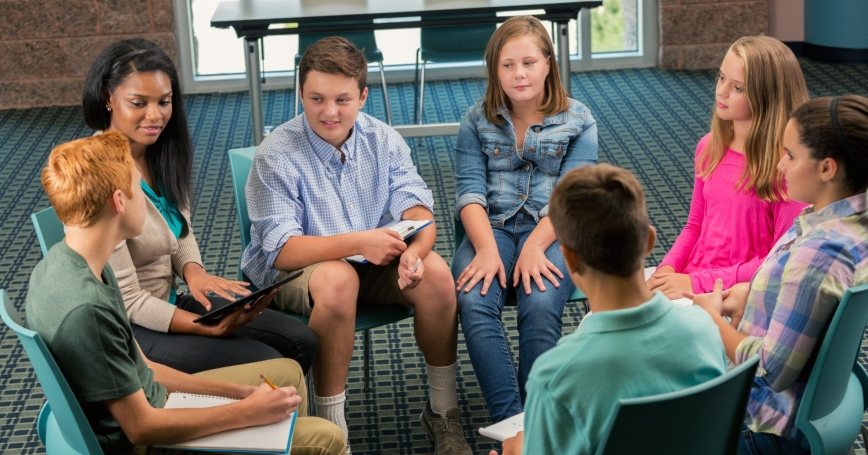 Middle school is a time when youths experience many changes physically and socially and can be exposed to drugs, sex, bullying, and other risks that can influence health, development, and, ultimately, the quality of their lives. During this high-risk time, it can be especially important for youths to have strong relationships with adults and peers and feel connected to their schools. When youths feel connected to their schools and the adults in it, they are less likely to use alcohol or other drugs, engage in violence, or initiate sex at an early age.

When youths feel connected to their schools and the adults in it, they are less likely to use alcohol or other drugs, engage in violence, or initiate sex at an early age.

Two RAND Corporation studies recently evaluated the use of restorative practices to strengthen relationships between students and teachers to build that connection to school. These include teachers and other adult staff soliciting thoughts and ideas from students when making decisions, such as developing classroom norms; expressing their feelings in response to students' behavior; encouraging students to express and respect their and others' feelings; addressing not just bad behavior but also the underlying causes; and focusing on healing the hurt associated with negative behavior. Many of these practices occur while students and teachers sit together in a circle, so everyone is face to face.

Collectively, the two research teams looked at the impact of using these practices on school climate, suspension rates, classroom climate, peer relationships, connection to school and academics. In both studies, schools that received the intervention were chosen randomly, which is the gold standard for research. These two studies are the first to use random assignment of schools to assess the impacts of restorative practices. The first study identified no differences between the schools that were implementing restorative practices and those that were not. The second study identified stronger school climates and lower suspension rates but worsened classroom climates and academic outcomes.

Overall, the negative impact on academic outcomes was not large. The average student in the study district scored at the 37th percentile of the state distribution; restorative practices would reduce this to the 35th percentile. However, the negative impact was almost completely experienced by students in schools with predominantly African-American students, increasing the district's racial achievement gap from 15 to 18 percentile points. Of note, the negative impact on achievement was worse in schools that did not reduce suspensions, suggesting that it had more to do with the difficulty teachers had in meeting all the demands on their time than with disruption by students who otherwise would have been suspended.

There are several reasons these two studies might draw different conclusions. Schools in the first study were scattered throughout the state; in the second study, the schools were all within one district and received support from district leaders. Thus, schools in the second study arguably had better support for implementation, given the roles played by district leaders, which could have resulted in better implementation in these schools and thereby better outcomes. The first study centered on a rural state where suspension rates were low; the second study focused on an urban district with higher suspension rates.

But the studies' findings were similar in some ways. In the first, across all schools, restorative experiences were associated with positive youth development for middle school students. Those students who reported experiencing more restorative practices also reported experiencing greater empathy, stronger social skills, less bullying (both cyber and physical), greater peer attachment, a stronger connection to their schools and a more positive school climate (characterized by teacher support, clarity and consistency of rules, and student input into classroom decisions). It is particularly notable that these results were found for cyberbullying victimization, which is especially difficult to address because it occurs outside of formal and controlled settings, such as school. The second study also found that middle school students who reported greater restorative experiences found more peer support, a better classroom climate and less bullying. Also, teachers at schools assigned to the intervention reported more positive perceptions of teaching and learning, and stronger relationships with students.

Both research teams also found that implementation quality varied and that teachers and staff wanted more support for implementation than the interventions provided. The ability to use restorative practices is honed over time through practice and regular feedback from experts, expensive supports that schools might not be able to afford or prioritize. Teachers and staff in the studies also wanted clearer expectations for what they should be doing and how often they should be doing it, which can be a challenge when an intervention is intended to change behaviors to improve relationships, and for which there is not a simple checklist. Leadership training for administrators and staff to learn how to collaboratively implement the intervention across their school was optional, which led some schools to opt in and some to opt out. Given the barriers that schools experience when implementing schoolwide interventions (staff turnover, school schedules, competing demands), districts could consider making this type of training mandatory, since involvement of school leadership is critical to overcome these structural barriers.

But without clear expectations and strong support, teachers and staff might not feel equipped to use the practices to build stronger relationships. This could be a missed opportunity to help middle school students avoid risky behaviors during this critical time in their lives—and to have a healthier and more productive future. There are many nuances to the implementation and impact of restorative practices, which suggests that continued experimentation could allow districts to realize the benefits of instituting these practices and reduce the cost of doing so.

This commentary originally appeared on The 74 Million on April 15, 2019. Commentary gives RAND researchers a platform to convey insights based on their professional expertise and often on their peer-reviewed research and analysis.