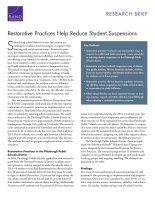 Schools and school districts across the country are looking for evidence-based strategies to improve their learning and social environments. Restorative practices, developed in the justice system as a way to mediate and repair relationships between offenders and their victims, are offering a way forward. In schools, restorative practices have been adopted to offer a means to respond to conflict and build relationships in an inclusive, nonpunitive way. The practices range from informal actions, such as using "I" (affective) statements to express personal feelings to build community, to formal practices, such as responding to a student's disruptive actions in a "responsive circle." In this circle, students and staff discuss the incident with the offender, being careful to emphasize the harm that was done rather than the person who did it. In this way, the offender is given time to reflect, apologize, make amends if necessary, and reintegrate into the community.

But are restorative practices effective? Researchers from the RAND Corporation conducted one of the first rigorous evaluations of restorative practices as implemented in a city school district. They found that the practices had a positive effect in schools by reducing school suspensions. The study was conducted in the Pittsburgh Public Schools district in Pennsylvania, which serves approximately 25,000 students in kindergarten through 12th grade in 54 schools. The research team conducted a randomized controlled trial of restorative practices in 44 of those schools between June 2015 and June 2017. The 44 schools were evenly split between schools that adopted a specific program and control schools that did not. The analyses focused on program implementation, as well as outcomes.

In 2014, Pittsburgh Public Schools applied for and received a grant from the National Institute of Justice to adopt restorative practices, seeking support to make the schools safer. A 2013–14 student survey had demonstrated to district leaders that 18 percent of students believed that they must be ready to fight to defend themselves, 35 percent felt angry about the way adults treated them at school, and 22 percent believed that student misbehavior slowed down learning. Additionally, 20 percent of all students and 28 percent of African American males were suspended during the 2013–14 school year. The district considered these suspension rates problematic for three reasons: (1) They supported the notion that Pittsburgh Public Schools were not safe places, (2) disparities in suspension rates raised questions about equity for African American students, and (3) suspended students were put at risk of low school achievement, dropping out, and other negative effects, as cited in studies on exclusionary disciplinary practices.

The Pittsburgh Public Schools district chose to implement the SaferSanerSchools™ Whole-School Change program, designed by the International Institute for Restorative Practices. The two-year program has 11 elements and includes on-site professional development, staff professional learning groups, and ongoing coaching. The elements are presented in the table.

The 11 Elements of the SaferSanerSchools™ Whole-School Change Program

The research team gathered and assessed quantitative and qualitative data pertaining to implementation and program outcomes. Outcomes were considered at three levels: (1) student: suspensions, arrests, attendance, mobility, and achievement; (2) teacher: student ratings; and (3) school: teacher ratings of teaching and learning conditions. While the findings are primarily positive, it should be noted that they represent only two years of implementation of a specific program and that researchers did not have access to information on behavior interventions in the control schools during the course of the study.

Strategies to build program capacity were successful. Staff in the schools using restorative practices were trained and supported throughout the two years of the study. The International Institute for Restorative Practices provided four days of professional development. All staff were asked to attend two of these days, and the other two were voluntary. Throughout the two years, books, videos, posters, and other supporting material were distributed in the schools, and all principals worked with a professional restorative practices coach. Principals were asked to establish restorative leadership teams, and the coaches were asked to schedule monthly calls with these teams to monitor progress and address challenges. The coaches also visited each of their assigned schools at least twice during each school year. School staff were asked to participate in monthly professional learning groups. The Pittsburgh Public Schools restorative practices project manager provided additional support to the selected schools, including supplementary materials and individualized coaching.

Restorative practices did not positively affect all students in the treatment schools. Despite fewer suspensions, academic outcomes did not improve in the treatment schools. At the middle grade level (grades 6–8), academic outcomes actually worsened in the treatment schools, and suspension rates in those grades did not change. It could be that it is more challenging for restorative practices to positively affect middle grade students, at least within a two-year time frame. Additionally, the study showed that there was no change in the rate of suspensions for male students or students with individual education plans, and there was no reduction in the number of incidents of violence or arrests. This study did not demonstrate that restorative practices can be effective in curbing the most violent behavior, at least within a two-year implementation period.

This study suggests that restorative practices are promising, particularly for elementary schools seeking to reduce suspension rates. The study elicited a number of recommendations for other districts considering a program similar to SaferSanerSchools™: