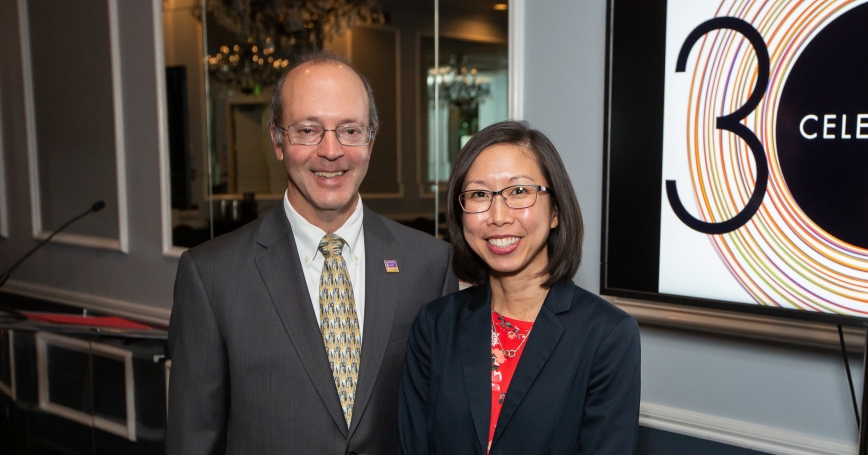 Holding a bag of crack cocaine in front of TV cameras in the Oval Office, President George H. W. Bush vowed to escalate the “war on drugs.” It was 1989, when concern about illicit drug use and related violent crime had risen to near-panic levels in the United States.

Thirty years later, the opioid crisis has replaced crack cocaine as front-page news. But the center continues to do what it was created to do: improve the understanding of substance use and assess the consequences of an expanding range of drug policies. Today that includes issues around legalizing cannabis, increasing access to medical addiction treatment, and changing law enforcement practices.

“We are always seeking to get ahead of the curve, to make sure policy conversations about controversial issues are grounded in science,” Beau Kilmer, director of the Drug Policy Research Center, said at a Nov. 16 celebration of the center's 30th anniversary. That event, at the Fairmont Hotel in San Francisco, brought together four previous directors—Reuter, Audrey Burnam, Martin Iguchi and Rosalie Pacula—as well as many center supporters.

Kilmer and other RAND researchers described how RAND is addressing today's big-picture drug policy questions and anticipating what issues might emerge in the years ahead. The researchers highlighted the need for innovative thinking and new approaches to drug policy challenges.

Bradley Stein, a senior physician policy researcher and psychiatrist, for example, described a model for treating opioid use disorder in primary care settings—increasing its availability. The conventional method, he said, has been to treat opioid use disorder primarily in the specialty treatment system, which is overwhelmed by demand.

“We need to challenge our thinking about treatment,” he said. “We don't treat many other chronic illnesses this way.”

Karen Chan Osilla, a senior behavioral scientist and clinical psychologist, described an approach to help military and veteran spouses concerned about a loved one's drinking—an approach outside the military health system. She highlighted two RAND studies that used social media to recruit participants to a free online program that provided guidance on how to talk to a spouse about problematic drinking.

“We live in an era where we want immediate help and any sign of delay is a barrier,” Osilla said. “By leveraging technology, we found an effective way to reach high volumes of veterans, service members and their spouses who would not otherwise seek help.”

RAND senior behavioral scientist Sarah Hunter also discussed removing barriers to care for veterans and other people who are experiencing homelessness. Hunter said studies show that for individuals with chronic health conditions, eliminating prerequisites for subsidized housing not only improved housing stability, it also reduced substance use. Further, when RAND evaluated Los Angeles County's Housing for Health program, which provides permanent supportive housing, it found that after taking into account the cost of the housing program, the county saved 20 percent on other services in the first year.

“For every $1 invested in the program, Los Angeles County received $1.20 back. These findings suggest that not only is [providing] housing the moral and ethical thing to do, it may actually save taxpayers money,” Hunter said.

The Drug Policy Research Center is also keeping an eye on other issues on the horizon. Changes to laws on psychedelic drugs—such as psilocybin, LSD and ayahuasca—could start to show up on state ballots, following the model of cannabis legalization, Kilmer said.

“Regardless of whether you think this is a good idea, drug policy reform by referenda is a very real phenomenon in California and many parts of the U.S.,” he said. “Someone needs to do the critical thinking and policy analyses to identify costs, benefits and unintended consequences—as well as serve as the honest broker in these heated debates.”

“We need to be prepared for these discussions and RAND is the place to help inform these debates,” Kilmer said.