State of the Union 2020: Insights from RAND 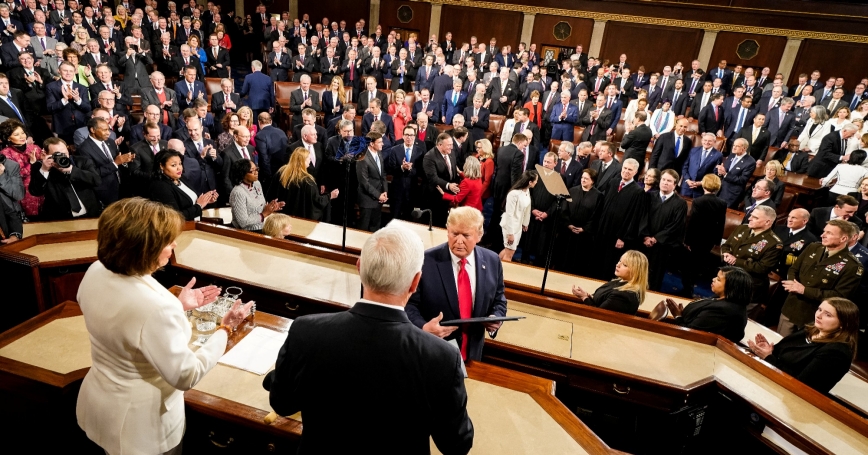 Photo by Doug Mills/Pool via Reuters

President Donald Trump gave the final State of the Union address of his four-year term last night. The speech was sandwiched between the first contest to determine his general election opponent on Monday, in Iowa, and a Senate vote expected this afternoon on whether to remove the president from office.

This unprecedented set of circumstances will likely form the lens through which many view the evening. But Tuesday's address touched on a range of policy challenges that will remain, regardless of how politics play out in 2020.

If policymakers are to develop effective solutions, then they'll need to draw on high-quality, objective, and nonpartisan resources. Below are excerpts from the president's remarks, followed by context from RAND research, analysis, and expertise.

“We will not quit until we have beaten the opioid epidemic once and for all.”

As part of our ongoing Opioids Uncharted initiative, RAND researchers are mapping the contours of the nation's opioid crisis, analyzing its underexplored consequences and charting a holistic understanding of the problem to help inform solutions.

The initiative's first major study offers the most comprehensive look at fentanyl and other highly potent synthetic opioids. The authors recommend thinking about the fentanyl problem as a mass poisoning, rather than a traditional drug epidemic. They also note that innovative, and controversial, responses—such as supervised drug-consumption sites—should be part of the discussion.

Other recent RAND research in this area has examined state policies that punish pregnant women for substance use. Findings show that babies born in states with these punitive approaches are more likely to be born with opioid withdrawal. Researchers suggest emphasizing prevention and access to treatment, rather than punishing women.

“The American patient should never be blindsided by medical bills.”

Patients can indeed receive large, unexpected bills—even when they receive treatment at hospitals in their insurance network. (Just ask two RAND researchers and first-time moms who delivered at the same hospital within a few weeks of each other, only to find that one of them was charged while the other was not.)

California recently aimed to address this problem by passing a law that limits the fees that out-of-network physicians can charge for care delivered in hospitals. According to RAND research, the law appears to be protecting patients from surprise bills. But there have also been some unintended consequences. Namely, bargaining leverage for payments is shifting in favor of insurance plans.

“A good life for American families also requires the most affordable, innovative, and high-quality health system on Earth.”

The president expressed concerns about single-payer health care proposals that have been discussed during the Democratic primary race.

After studying the potential effects of a single-payer proposal in New York State, RAND researchers analyzed a hypothetical national plan that would provide comprehensive health care coverage to all Americans, including long-term care benefits and no cost sharing.

They estimated that total health expenditures would’ve been 1.8 percent higher in 2019 under such a plan, relative to the status quo. This would have been a relatively small change. However, federal health care spending would have spiked, rising by an estimated 221 percent.

A RAND study released just last week provides some important context on the wider health care debate by examining how the current system distributes costs and payments. The takeaway: Health care payments in the United States may be even more regressive than you thought.

Researchers find that U.S. households in the bottom fifth of income groups pay an average of 33.9 percent of their income toward health care, while families in the highest-income group spend only 16 percent.

In the video below, lead author Katherine Carman explains why this kind of research is so important to ongoing policy conversations.

The Value of Correctional Education

“Our roaring economy has … given many former prisoners the ability to get a great job and a fresh start. This second chance at life is made possible because we passed landmark justice reform into law.”

President Trump was referencing the First Step Act, a bipartisan criminal justice bill he signed into law in December 2018. Among other measures, the law includes funding for education and jobs programs in America's prisons.

RAND research has shown that inmates who take part in any kind of educational program are up to 43 percent less likely to return to prison. These programs also save taxpayers money. Every dollar invested saves nearly five in reincarceration costs over three years.

Elsewhere, RAND experts have explored policies that might encourage employers to hire ex-offenders. Researchers have also sought new solutions by relying on the expertise of the people who know the system from the inside: the former inmates themselves.

“We must also rebuild America's infrastructure.”

RAND research finds that, while the United States faces infrastructure challenges, “not everything is broken” with transportation and water infrastructure funding and finance. But leaders must reach a consensus on priorities, while pursuing targeted spending and policy changes.

“Spreading federal dollars around to fund short-term, 'shovel-ready' projects without a sense of national purpose or priority will not get the nation where it needs to be,” says Debra Knopman, who led the effort.

Other RAND research has emphasized the importance of incorporating resilience into transportation planning. Doing so can help ensure that transportation systems are either not exposed to hazards or, if they are exposed, have the capacity to withstand a shock.

In the video below, Knopman and Sarah Weilant, who led the resilience report, offer key insights for policymakers.

RAND experts have produced an enormous body of research on the needs of military spouses, children, and caregivers over the years. It would be impossible to list all our studies here, but some highlights include