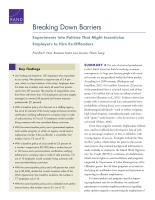 Experiments into Policies That Might Incentivize Employers to Hire Ex-Offenders

Does not include Appendix

The rate of criminal punishment in the United States has had far-reaching economic consequences, in large part because people with criminal records are marginalized within the labor market. Given these negative economic implications, federal, state and local officials have developed a host of policies to encourage employers to hire ex-offenders, with varying degrees of success. To inform policies and programs aimed at improving employment rates for ex-offenders, we examined employer preferences regarding policy options targeted to incentivize hiring individuals with one nonviolent felony conviction. In our experiments, we found employers were 69 percent more likely to consider hiring an ex-offender if a hiring agency also provides a guaranteed replacement worker in the event the ex-offender was deemed unsuitable and 53 percent more likely to hire an ex-offender who can provide a certificate of validated positive previous work performance history. Having consistent transportation provided by a hiring agency increased the likelihood of being considered for hire by 33 percent. Employers also were found to be 30 percent more likely to consider an ex-offender for hire if the government increases the tax credit from 25 percent of the worker’s wages (up to $2,500) to 40 percent (up to $5,000) — double the current maximum amount allowed by the Work Opportunity Tax Credit — and 24 percent more likely to hire an ex-offender if the government completed all tax-related paperwork.

Employer Access to Previous Performance Could Factor into Hiring

This project is a RAND Venture. Funding was provided by gifts from RAND supporters and income from operations. The research was conducted within RAND Labor and Population.