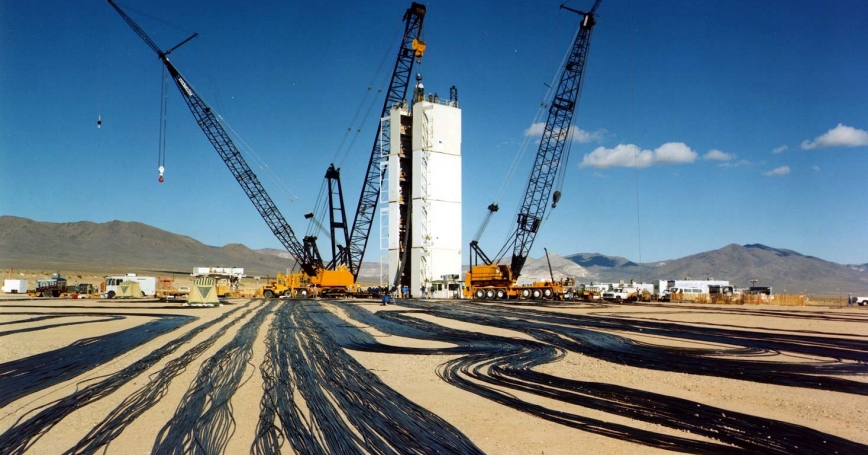 Signal cables are laid out at a test location on Yucca Flat, the principal underground nuclear weapons testing area at the Nevada Test Site, in the 1990s

Trump administration officials are reported to have recently discussed conducting a nuclear test, breaking a moratorium the United States has observed since 1992. Such a move is not necessary to ensure the continued reliability of the U.S. nuclear arsenal. It could also increase threats to U.S. and allied security by giving a green light to other countries, including dangerous proliferators, to conduct nuclear tests of their own.

The last U.S. nuclear test (PDF) took place in 1992 at the Nevada Test Site, located only 90 miles from Las Vegas. That same year, President George H.W. Bush signed into law a moratorium on nuclear testing which every President since then has observed.

In 1996, President Bill Clinton signed the multilateral Comprehensive Nuclear-Test-Ban Treaty (CTBT). The United States has interpreted the treaty as prohibiting “all nuclear explosions that produce a self-sustaining, supercritical chain reaction of any kind,” known as the “zero-yield standard.”

The CTBT has not yet entered into force because the United States and seven other countries that must ratify the treaty for it to take effect have not done so. Nevertheless, under the moratorium the United States has continued to adhere to the zero-yield standard.

To ensure that America's nuclear arsenal remains effective without nuclear testing, the Department of Energy in 1995 established the Stockpile Stewardship Program. For over 25 years, DOE's national laboratories have conducted a variety of hi-tech, non-nuclear experiments involving materials and components used in nuclear weapons.

The results of these experiments, together with archived data from the 1000-plus U.S. nuclear tests conducted before 1992, are analyzed using sophisticated models run on the world's fastest computers.

As a former Los Alamos National Laboratory director testified, this science-based approach has provided insights on managing the nuclear weapons stockpile that were “unimaginable two or three decades ago.” (PDF)

Armed with these insights, the Departments of Energy and Defense have certified (PDF) to the President for 23 consecutive years that U.S. nuclear weapons remain safe, secure, and effective without the use of nuclear explosive testing.

So, why might some officials be talking about resuming nuclear testing? Press accounts cite two possible reasons, both of which are political rather than technical in nature.

A recent Department of State report noted that “Russia has conducted nuclear weapons–related experiments that have created nuclear yield.” It also expressed concern about China's adherence to the zero-yield standard. Conducting a U.S. nuclear test could possibly be viewed as a way to induce both countries to refrain from such activity.

Similarly, some officials reportedly think that a resumption of U.S. testing will help persuade Moscow and Beijing to enter into three-way negotiations on controlling nuclear arms, a stated objective of the Trump administration.

Breaking the nuclear test moratorium for these reasons is unlikely to achieve the intended purpose, and would entail significant downside risks.

A resumption of U.S. testing is likely to be viewed by [Russia and China] as carte blanche to undertake full-scale testing to improve existing weapons or field new capabilities.

First, rather than persuading Russia and China to abide by existing agreements or entering into new ones, a resumption of U.S. testing is more likely to be viewed by both countries as carte blanche to undertake full-scale testing to improve existing weapons or field new capabilities.

Second, U.S. testing may lower perceived political costs to potential proliferators, such as Iran, of conducting tests to develop nuclear weapons. U.S. demands that North Korea refrain from further nuclear testing would carry less weight. Likewise, India and Pakistan, both of which carried out nuclear tests in 1998, might feel free to do so again, thereby exacerbating tensions in an unstable region.

Third, every NATO country, as well as Japan and South Korea, has ratified the CTBT. Many would publicly oppose a resumption of U.S. nuclear testing, placing added stress on alliances already beset by profound concerns about the tenor and direction of U.S. foreign policy.

Fourth, a return to U.S. testing could put at risk the bipartisan consensus in Congress that for the past decade has supported both nuclear modernization and arms control. Much-needed programs to modernize the aging U.S. nuclear arsenal and associated infrastructure would be imperiled.

There is no technical reason to resume testing now. The Stockpile Stewardship Program works extraordinarily well in ensuring the reliability of the U.S. nuclear arsenal. If ever a technical problem emerges that cannot be resolved by science-based tools, then and only then might consideration of a return to nuclear testing be warranted.

For now, it's likely that the best way to gain negotiating leverage with Russia and China on controlling nuclear arms is to continue updating U.S. nuclear forces, as well as DOE's laboratories and production facilities, to ensure they remain fully capable of providing for U.S. and allied security now and in the future.

William Courtney and Frank Klotz are adjunct senior fellows at the nonprofit, nonpartisan RAND Corporation. Courtney was U.S. ambassador to Kazakhstan, Georgia, and the U.S.-Soviet commission to implement the Threshold Test Ban Treaty. Klotz, a retired lieutenant general, was the first commander of Air Force Global Strike Command and administrator of the National Nuclear Security Administration.

This commentary originally appeared on Newsweek on June 10, 2020. Commentary gives RAND researchers a platform to convey insights based on their professional expertise and often on their peer-reviewed research and analysis.