Russia Is Eyeing the Mediterranean. The U.S. and NATO Must Be Prepared 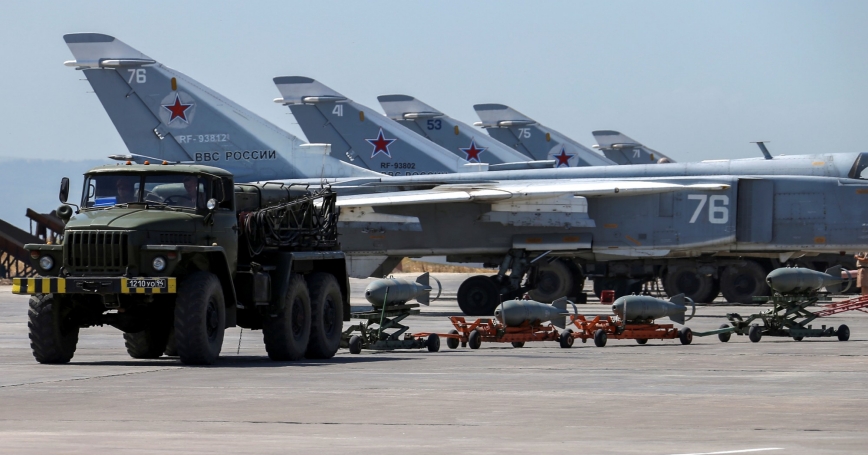 Russian military jets at Khmeimim Air Base in Syria, June 18, 2016

As part of its great power exertions Russia seeks more access and freedom of movement in the Mediterranean region, and is bolstering its military footprint to achieve this objective. To address this rising challenge the United States and NATO could develop a more robust southern strategy with a reinforced air and naval presence, respectively.

Not since Egypt ordered out Soviet forces in 1972 has Moscow had a major military base in the Mediterranean. This is changing. By upgrading its military posture in the region, Russia seems to believe it can be more successful in projecting power and minimizing the influence of the United States and NATO.

In 2015 Russian air power rescued Syria from a growing insurgency that threatened to topple the Assad regime. Now, Damascus is returning the favor. In 2017 Russia announced formation of a "permanent group of forces" at the port of Tartus and nearby Khmeimim air base.

Previously, Russia had use only of a modest naval logistics facility at Tartus. Under a new 49-year lease, Moscow is funding a $500 million expansion. It will provide Russian warships with greater capacity for sustained and more distant operations in the Mediterranean Sea.

Russia has deployed dozens of combat aircraft at Khmeimim and possibly the long-range S-400 air defense system. But the base, which is being expanded, could be vulnerable. It may have faced drone swarm attacks and a missile attack from al-Nusra.

By upgrading its military posture in the Mediterranean region, Russia seems to believe it can be more successful in projecting power and minimizing the influence of the United States and NATO.

In eastern Libya, Moscow may hope that its air power and mercenary forces, including the Wagner Group, will gain sway with future rulers there. This could involve Libyan warlord Khalifa Haftar or other powerbrokers. Last May U.S. Africa Command (AFRICOM) said 14 unmarked MiG-29 fighter jets and SU-24 fighter bombers were deployed to eastern Libya. AFRICOM warned that if Russia secured a “permanent position” and deployed long-range missiles, this would be a “game changer for Europe, NATO, and many nations.”

Russia may see potential for access to an energy bonanza in the eastern Mediterranean. Perhaps partly for this reason the Kremlin has increased support for the beleaguered Libyan National Army (LNA). But it has suffered setbacks due in part to Turkish-supplied unmanned aerial systems used by the United Nations–backed Government of National Accord based in Tripoli.

Russia has increased its access and influence in Egypt. In 2017 Cairo and Moscow agreed on the use of Egyptian bases for Russian combat aircraft, and last year Russia carried out the largest air defense drill there ever. Russia has begun producing $2 billion worth of Su-35 fighter jets for Egypt.

These Mediterranean activities complement Russia's much larger military buildup in Crimea. It will give Moscow greater capacity to strike targets in the Black Sea and even the Middle East. Ten additional warships now based in Crimea can launch the Kalibr cruise missile, which has a range of over 1,500 kms. Russian submarines have launched these missiles in the Mediterranean.

Following Russia's armed intervention in Ukraine in 2014, the United States and NATO reinforced (PDF) the Alliance's eastern flank. In an October 2019 report former NATO Deputy Secretary General Alexander Vershbow said the Alliance has fallen short, however, in its “southern strategy.”

U.S. naval presence in the Mediterranean could be strengthened without major impact on overall U.S. Navy ship management. Warships could spend more time there as they go to and from the Middle East, and they could make limited rotational deployments. At moderate cost enhanced U.S. and NATO air and naval exercise programs in the Mediterranean could leverage existing Alliance facilities and forces, and communicate a message of interest and determination.

Some critics contend that Syria and Libya are not critical to U.S. security interests. U.S. involvement would only bog down an American military that should be countering a rising China, or U.S. forces could be stymied in unwinnable conflicts lacking strategic purpose. In this vein the Trump Administration slashed support for anti-Assad Kurdish fighters, and the Obama Administration shied away from a larger role in Libya.

In U.S. absence, however, Russia, Turkey, or other regional players such as the United Arab Emirates and Saudi Arabia could fill some of the void in less than helpful ways, such as in Syria, Libya, and Egypt. For this reason and because Russia may increase air and naval basing there, Western priorities could change. The United States and NATO might give more thought to a strategy that could better deter potential Kremlin risk-taking in the Mediterranean.

Colin P. Clarke is a senior research fellow at The Soufan Center and an adjunct senior political scientist at the nonprofit, nonpartisan RAND Corporation. William Courtney is an adjunct senior fellow at RAND and was U.S. ambassador to Kazakhstan, Georgia, and a U.S.-Soviet commission to implement the Threshold Test Ban Treaty. Brad Martin is a senior policy researcher at RAND and served in the U.S.Navy as a surface warfare officer, retiring after 30 years of service as a captain. Bruce McClintock is a policy researcher at RAND and served for 30 years in the U.S. Air Force, including an assignment as the U.S. defense attaché to Russia 2014–2016.

This commentary originally appeared on Newsweek on June 30, 2020. Commentary gives RAND researchers a platform to convey insights based on their professional expertise and often on their peer-reviewed research and analysis.