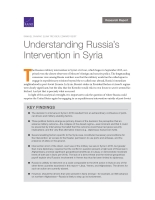 Russia's 2015 military intervention in Syria's civil war took many by surprise and raised questions about the potential for similar actions in other conflicts outside of post-Soviet Eurasia. The authors of this report assess where and under what conditions Moscow could intervene again by analyzing the factors that drive Russian decisionmaking on intervention. In addition to the 2015 intervention in Syria, they examine four smaller-scale interventions in conflicts outside of Russia's immediate neighborhood: Libya, Afghanistan, Yemen, and Syria itself before 2015.

The analysis demonstrates that Moscow's decision to intervene in Syria in 2015 resulted from an extraordinary confluence of political drivers and military conditions. This set of circumstances is very unlikely to be replicated elsewhere. Indeed, the drivers for an intervention on a scale comparable to the 2015 action in Syria are absent in any of the other three countries examined in the report. However, the other cases that were considered in this report suggest that the conditions for intervention short of direct, overt use of the military, but greater than mere diplomacy, are more commonplace: The conflict in question presents a high level of threat to Russian security (as in Afghanistan), promises a high level of geopolitical benefit for Moscow (as in Libya), or demonstrates moderate levels of both (as in Syria pre-2015). That threshold could plausibly be met in a variety of country settings, which suggests that there are likely to be more of these smaller-scale interventions in the future.

The research reported here was commissioned by USAFE-AFAFRICA A5/8/9 and conducted by the Strategy and Doctrine Program within RAND Project AIR FORCE.