Should the U.S. Move to Strengthen Ties with Taiwan? 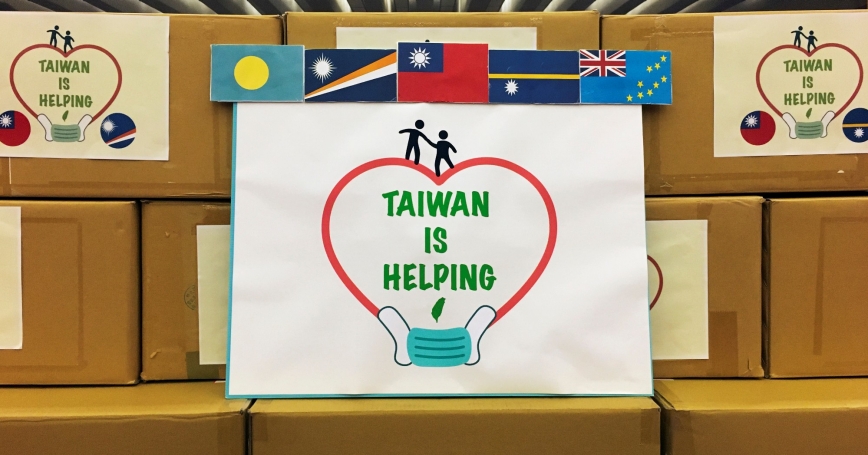 A sign with flags of (R-L) Tuvalu, Nauru, Taiwan, Marshall Islands, and Palau is seen before a ceremony to donate masks to Taiwan's Pacific allies, April 15, 2020

Experts believe COVID-19 will likely lead to permanent shifts in political and economic power around the world. Through its actions during the pandemic, China has made clear it is striving to expand its influence at the expense of the liberal international order. While Beijing appears to be using the pandemic to spread its influence and threaten its neighbors on virtually every front, according to the U.S. Department of State, Taiwan has demonstrated that it is a “vibrant democracy and a force for good” with both its domestic efforts against the pandemic as well as its assistance to other nations.

The contrasts in behavior between Taiwan and China during the COVID outbreak show why it could be critical that U.S. policymakers consider advancing U.S.-Taiwan cooperation to enhance Taiwan's security, protect U.S. interests, and preserve peace and stability in the Indo-Pacific.

Taiwan's success in tackling COVID-19 has been exemplary. To prevent a major outbreak, Taiwan reacted promptly. Instead of trusting in China to respond effectively to contain the virus, Taiwan quickly adopted travel restrictions, mask-wearing, and social distancing; put together a track-and-trace approach to breaking transmission chains; and communicated clear, science-based advice to the public. Its leaders also worked with the media to send out positive messages urging Taiwan to pull together and counter efforts to divide society. As a result, its 24 million residents have not faced a lockdown, and the island has suffered a total of just 441 cases and 7 deaths. Little wonder COVID-19 has strengthened Taiwan's already strong sense of distinct identity and engendered an all-time high public approval for President Tsai Ing-wen.

China has tried to take advantage of the pandemic by ramping up provocations against Japan, India, Malaysia, and Vietnam.

With its own health situation largely under control, Taiwan has turned to assisting the world, donating as many as 10 million masks to foreign countries. Taipei agreed to send America 100,000 surgical face masks per week, and has already delivered over 500,000. It also provided supplies and health assistance to other states with which it has close ties, and even held an online seminar with doctors from the Dominican Republic and El Salvador, countries that switched their diplomatic ties to Beijing in recent years. And when China moved to block Taipei from participating in the World Health Assembly and threatened to hold up a key opportunity for global dialogue on countering the pandemic, Taiwan stood down from its quest to attend, citing limited time for other countries to discuss containment of the coronavirus pandemic.

In contrast, China has attempted to take advantage of the crisis by ramping up its provocations against Japan, India, Malaysia, and Vietnam. It has also threatened to withhold medical equipment to countries trying to strengthen their relations with Taiwan. Instead of providing data on the origins of the virus and what Chinese officials knew and when they knew it, Beijing silenced its medical workers who tried to sound an early alarm and launched a propaganda campaign claiming the U.S. Army was the source of the virus. Beijing even threatened to impose economic sanctions on Australia over Canberra's calls for an international investigation of the virus's origins. China even appears to be taking advantage of the pandemic to conduct increased transits and military exercises near Taiwan and make increasingly frequent incursions into Taiwan airspace. Disturbingly, as PLA Chief of Staff Li Zuocheng recently stated, if the only pathway remaining to achieve its goal is the use of force, China will not rule out attacking Taiwan.

Washington could consider speaking up more vocally for Taiwan and rallying key partners in Asia, Europe, and elsewhere.

In light of China's intentions, and recent passing of a national security law that eliminated the significant autonomy Beijing had committed to ensure in the “one country, two systems” approach that it had applied to Hong Kong, a formula originally intended to appeal to Taiwan, now could be the time to begin enhancing Taiwan's security. The United States could consider speaking up more vocally for Taiwan and rallying key partners in Asia, Europe, and elsewhere to do so, too. They should publicly oppose Chinese provocations against Taiwan and privately make it clear what sorts of support they could offer were China to attack Taiwan.

Inside the United States, opinion shapers and political leaders could consider advancing a consensus on the importance of supporting Taiwan's security through steps such as recent proposed legislation aimed at increasing U.S.-Taiwan cybersecurity cooperation, reinforcing the signals of U.S. commitment sent by the Taiwan Travel Act or the Taiwan Allies International Protection and Enhancement Initiative Act. U.S. defense posture and readiness in the Indo-Pacific may also require more resources and attention. And Taipei may need continued assistance as it restructures its own defenses, meaning the United States could continue to review and approve appropriate requests for defense articles and services for sale to Taiwan.

The Chinese Communist Party's behavior during the COVID-19 crisis may well have clarified its nature and intentions. Taiwan, by contrast, continues to show strengths as a democratic system that is aiming to partner with the world. The threat China poses is real and could come to Taiwan perhaps even without a great deal of notice. Protecting Taiwan from these realities could require a bold, urgent response from the world.

This commentary originally appeared on The Hill on June 5, 2020. Commentary gives RAND researchers a platform to convey insights based on their professional expertise and often on their peer-reviewed research and analysis.