Police Officers: This Article Will Make You Better at Combatting Misinformation 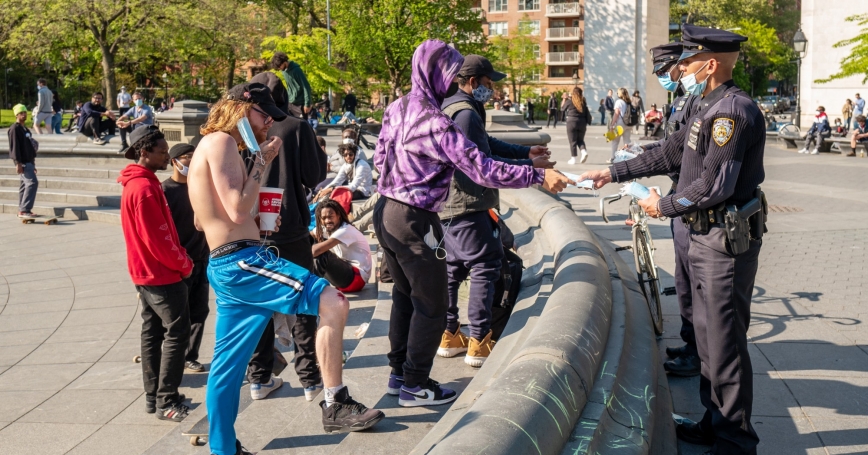 There is great uncertainty about how to handle the COVID-19 pandemic. Various sources and personalities discuss their personal views, contributing to the increasing spread of misinformation about the risks of infections. This has resulted in the police being asked to enforce mask policies and health orders, to respond to “pop-up” parties, and to handle disturbances between groups for or against issues seen as infringing on personal liberties. This is occurring when many jurisdictions are also trying to maintain order in the midst of protesters whose conduct degrades into criminal acts or unlawful assemblies. Struggling to police these events, officers have suffered attacks over COVID-19 disputes, being spit on, struck and even shot.

At a time when conspiracies and fear abound, the police have an opportunity to protect the public from misinformation, as well as to enforce the law to protect public health and public safety. As they maintain a neutral stance, police can be relied on for information about what we know and do not know about the pandemic. This article is intended to help provide an understanding of what is driving the misinformation that might compromise public safety, along with strategies to counter it.

In 2018, the RAND Corporation published Truth Decay to explore the impact of the shift away from reliance on objective facts and data in political debate. The report noted four related trends:

In a time when the instinct might be to retreat away from exchanges in cyberspace or in the real world, the counterintuitive alternative is the best path—to use the truth—facts, data, reasoned insight and a willingness to share perspectives respectfully—to achieve success.

To effectively combat untrue or misused information, everyone in the agency must be committed to disseminate only accurate, validated information, and not add fuel to a budding fire by repeating rumors, speculating, or “wondering aloud” if uncertain.

Although police administrators understand how what they say influences public opinion, officers and line staff may not consider how they carry their organization's credibility with them each time they communicate. To ensure their agency is seen as neutral in the political debate, and to avoid the pitfalls of casual statements being interpreted as department policy, there are three steps every police officer can follow.

Know the Laws and Policies

The first step is knowing laws and policies, remaining neutral in regard to the constitutionality or legality of public health orders, and remaining empathetic to all sides of contentious issues. Misinformation might be considered its own form of harmful virus from which communities should be protected.

Recognize What Information Should Be Shared

The second step is to recognize what information about combating COVID-19 should be shared. There are general health practices that have been approved and heralded by groups across the political spectrum, ranging from the Center for American Progress, Vox, McKinsey, American Enterprise Institute, and the Foundation for Research on Equality Opportunity. These practices typically call for hand washing and social distancing, staying home if coughing, and refraining from gathering in crowds, especially indoors with recycled air.

In addition, many policymakers have called for communities to stay at home for a period of time, with the expectation that these restrictions will be gradually relaxed. Health officials and governing bodies also call for some form of widespread testing, starting with the potentially infected (those showing symptoms or in extended contact with the infected). The next steps are contact tracing, followed by testing and helping to quarantine people who were in close contact for an extended time. Proposals include isolation measures that would include providing hotel rooms so victims do not spread the virus to their households and neighbors. Most proposals call for various economic support programs to help maintain these measures.

It is important to know that these measures have been relatively consistent over time, with one of the few major changes involving recommendations to wear cloth masks. This relative consistency is remarkable, given that we are facing a new virus with discoveries about it arriving almost hourly. Disagreements are largely about the specifics of what should be reopened, when, and under what conditions. Generally, however, there is consensus on the larger framework to remain safe from the virus while communities are reopened. To this general framework, police can add specific policies and guidelines in their state or locality.

That leads to the third step—understanding what drives the creation and spread of misinformation. For example, articles and social media posts often do not convey the sense that agreements can be achieved, or that people can retain their individual rights while respecting those of others. Instead, there is a surplus of misinformation emphasizing major conflicts across the country, much of it stoking fear and anger.

There is a surplus of misinformation emphasizing major conflicts across the country, much of it stoking fear and anger.

This is not surprising, as studies show that posts and articles stoking fear and anger generate much more “engagement” and reposting from readers, which often results in higher revenue to the authors.[1] Researchers have also found that readers, especially when feeling fearful and overwhelmed, are more likely to be influenced by messages that are repetitive, appear to come from others who are like the recipient (such as the same political group), and are consistent with other information the recipient believes. Even how headlines are written can impact how much influence an article has. As an example, this article's headline includes the phrase “will make you,” as in “will make you feel an emotion or gain a new understanding or skill.” Researchers have found this to be the phrase that generates the most engagement on social media.

How Police Can Combat Misinformation

The news is not all bad; studies have also found ways to counter false and misleading information. This leads to specific actions police might take to combat misinformation.

We can divide this into possible options for police acting in a public communications role and for police in the field.

For Police in a Public Communications Role

For Police in the Field

By deliberately addressing misinformation, officers can promote safe and healthy behaviors among those in their communities. The actions you take to combat misinformation and improve protections in your communities are a critical part of the collective campaign to end the pandemic and help people return to their normal lives.

John S. Hollywood is a senior operations researcher, Bob Harrison is an adjunct researcher, Miriam Matthews is a senior behavioral and social scientist and Dic Donohue is an associate policy researcher at the nonprofit, nonpartisan RAND Corporation.

This commentary originally appeared on Police1 on August 21, 2020. Commentary gives RAND researchers a platform to convey insights based on their professional expertise and often on their peer-reviewed research and analysis.