As the Vaccines Arrive, So Do the Questions 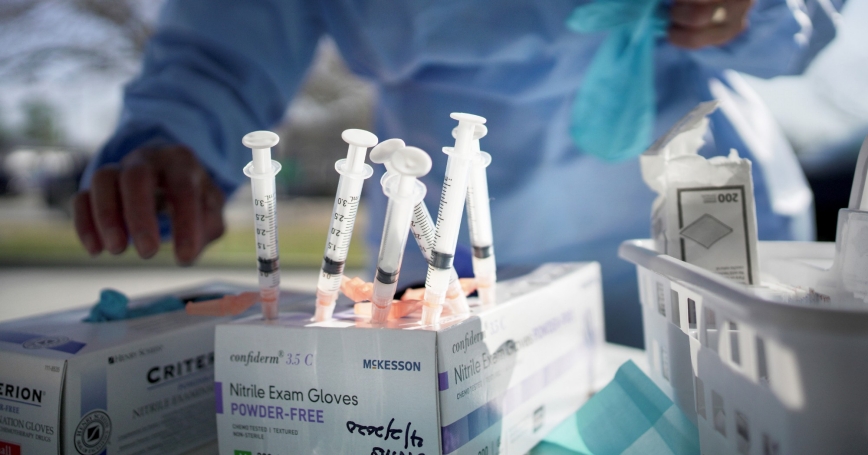 The Moderna COVID-19 vaccine is administered during a drive through event at InclusivCare in Avondale, Louisiana, January 9, 2021

As the first COVID-19 vaccines are being administered across the United States—developed, tested, and approved with historic speed—countless questions have arisen about what comes next. Is one vaccine better than another? Can the United States both speed up inoculation and overcome some people's hesitance to get the shot?

Dr. Courtney Gidengil, a senior physician policy researcher in RAND's Boston office, authored a comprehensive review of vaccine safety in 2014, which is being updated now and will be released soon. She said that the size of the patient trials (over 30,000 participants in each of the Pfizer and Moderna trials) and length of follow-up to date should instill confidence, despite the newness of mRNA vaccines. Extended studies of other vaccines also show no evidence of long-term damaging effects, she said. The robust vaccine safety monitoring system that is already in place is also being expanded for the new COVID-19 vaccines.

For teens and younger children, however, vaccine trials are just getting underway. Children respond differently to COVID-19, rarely getting ill; but the rare serious reaction to the virus is a dangerous inflammatory response about a month later. Gidengil, who is also an infectious disease physician at Boston Children's Hospital, says that trials are getting underway for children as young as 12 and expects to see trials starting for those younger than 12 and pregnant women this spring.

That the initial rollout has been bumpy shouldn't be a surprise. State public health systems have been stretched thin by the pandemic for months.

That the initial rollout has been bumpy shouldn't be a surprise, noted Jeanne Ringel, director of RAND Heath Care's Access and Delivery Program. State public health systems have been stretched thin by the pandemic for months. Florida's approach, which is to make anyone 65 and older eligible immediately for vaccination, shows the challenges of fast mass vaccination. County officials, for instance, resorted to using commercial platforms like Eventbrite to manage reservations, and phone systems were overwhelmed by demand.

“There's always a tension between the prioritization and the speed at which we can vaccinate. So if we're going to focus on prioritizing particular groups, then that's going to take a little longer because we have to identify those groups,” Ringel said. A first-come first-served approach might get more shots administered more quickly, she added, but it might not be as effective from a public health perspective.

The virus, of course, is continuing to spread rapidly in the United States, leading some to ask whether those who have had the disease—or worry that they've been recently exposed—should get the vaccine. The current eligibility guidelines say that those with active COVID-19 symptoms can wait 90 days if supplies are limited, Gidengil said. It's also unknown how long antibodies last from natural infection.

“There really are no safety concerns at this point based on the trials—which included at least some people with COVID-19—as well as our experience with other infections and vaccines,” Gidengil added. “Whether you know you had COVID-19 or not, there's no contraindication to taking the vaccine at some point. It's best just to take it as soon as possible if offered.”

For those in non-priority groups, vaccines will likely be available late spring or early summer, depending on the supply and demand in a particular location. “If you're in communities where there is more vaccine hesitancy and therefore less demand, you might be able to get a vaccine earlier,” noted RAND senior policy researcher Lori Uscher-Pines, who has conducted projects on vaccine distribution.

The other variable is how quickly additional vaccines might be granted emergency use authorization by the U.S. Food and Drug Administration, which also could expand the number of doses available. Internationally, other types of vaccines—such as those that use inactivated virus—are already safely being given out, said epidemiologist Dr. Jennifer Bouey, who is RAND's Tang Chair in China Policy Studies and works on global health and pandemic preparedness.

There is some difference in the level of protection that each demonstrated in the drug trials, but all are above 50 percent effective, Bouey said. “If we were to use multiple types of vaccine, that's OK,” she added. For instance, if patients got an mRNA vaccine this year, they could get one that used a weakened or inactivated virus in the future. That could be important because it's also unknown how long protection from a vaccine will last. Immunity protecting against other coronaviruses such as SARS and MERS lasts just a year or two, Bouey said.

It's unknown if those who are exposed to the virus after being vaccinated might still be able to transmit the virus to others.

The RAND experts also cautioned people not to change their behavior and urged them to continue to be just as careful after getting vaccinated. At the moment, it's unknown if those who are exposed to the virus after being vaccinated might still be able to transmit the virus to others. That is being studied now by vaccine makers Moderna and Pfizer with more data expected to be released in late January and February.

“We have reason to believe that vaccine should considerably cut down on transmission,” Gidengil said. But COVID-19 “behaves differently than a lot of infections we've seen, so we want to be careful to err on the side of being conservative and not make any assumptions.”

All of these unknowns are likely contributing to some people's reluctance to get the vaccine—including health care workers, who were placed at the front of the line in most states. But this dynamic could change, noted Uscher-Pines. Although hospitals cannot mandate the vaccine as a condition of employment when it has only emergency use authorization, they can create other “carrots and sticks,” such as recommending more PPE for those who are not vaccinated.

“Health care workers tend to work in tightly bonded teams. One strategy recommended for them is to have one-on-one conversations between those who are more confident about getting immunized,” Gidengil said. “At my hospital, I work in the infectious diseases group. I literally get stopped in the hallways by nurses who are pregnant or breastfeeding or a trainee who is just not sure about the vaccine and it's a great opportunity to talk through the data.”