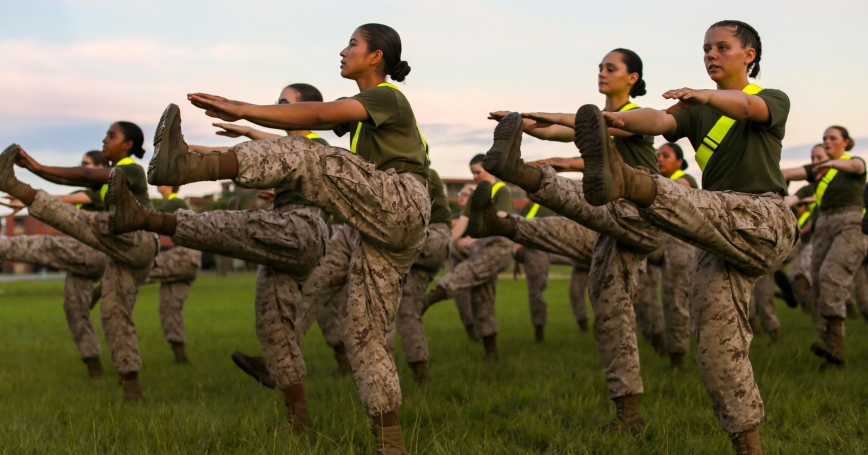 In the summer of 2021, a Marine posted a picture of herself on social media with a description of the extreme lengths that she resorts to twice a year to make weight. Noting that despite her consistently high fitness test scores and strenuous workouts, only cyclical calorie deprivation and the resulting brief weight loss kept her in height-for-weight standards. Unfortunately, her story resonated with Marines of all genders and ranks; her post was shared hundreds of times, often accompanied by others' extreme stories of unhealthy, unnatural weight loss, and fears of failing to meet standards.

The behaviors that this Marine and others reported can be described as disordered eating behavior. Studies show that disordered eating is an underreported and risky problem within the Department of Defense and is especially acute in the Marine Corps and among female service members. Where diagnosis numbers are reported, from the handful of analyses that exist, female Marines exhibit the highest rates of disordered eating.

With an understanding of these issues facing Marines, having both worn the Marine Corps uniform, we decided to examine the Marine Corps Body Composition and Military Appearance Program (BCMAP) and associated policies. We sought to identify, through existing literature, potential impacts on individual Marines' health and cognitive ability and on the corps as an institution. While we found significant current interest in the topic, we found limited research on body composition policies and eating disorders within the Marine Corps, with little discussion of potential health impacts these policies may have on individual Marines and on the corps. Using studies of similar groups as proxies, such as other service members, veterans, and athletes, we were able to draw conclusions about potential health risks these policies may expose the individual Marine to along with possible impacts on the service.

Body composition standards were developed decades ago from unrepresentative populations, and did not necessarily represent healthy standards for a diverse force.

A review of the body composition standards identified that they were developed decades ago from unrepresentative populations, and that they did not necessarily represent healthy standards for a diverse force—standards that should also account for the increased muscle mass required for compliance with tough occupational specialty standards. Moreover, we identified that these standards, intended to support the growth and maintenance of a fit, healthy force that can handle the rigors of combat and training in today's Marine Corps, potentially conflict with the intended purpose of assessing and ensuring the physical fitness and health of Marines. We also found that the Marine Corps, more so than other services, places a heavy emphasis on physical appearance as a required leadership trait. This coupled with a culture of strict adherence to fitness standards potentially drive Marines—particularly women and persons of color—to adopt unhealthy behaviors to meet those standards.

These unhealthy behaviors include such drastic measures as significantly restricting food and drink intake, dehydration for weeks or days preceding a weigh-in, working out excessively or multiple times a day (at times wearing clothing designed to increase sweating), inducing vomiting, laxative use, and spitting repeatedly to get rid of every possible ounce. These risky behaviors, all indicators of potential disordered eating behavior, can cause short- and long-term mental and physical health problems that can persist throughout a Marine's career and long after they leave the service. Research identifies links between disordered eating and depression, anxiety, obsessive-compulsive disorder, PTSD, and lower-rated mental health and quality of life. Physical health risks include obesity, substance-abuse problems, infertility or amenorrhea, pregnancy complications, osteoporosis and osteoarthritis, and gastrointestinal problems. Additionally, and especially problematic for the Marine Corps, disordered eating impairs cognitive function. Caloric restriction can impair perceptual measures and nonverbal memory among other things.

These identified risks have repercussions for readiness and for the Marine Corps' elevated emphasis on talent management and retaining a lethal fighting force. Leaders who operate under a severely restricted diet can be less effective, impacting operational outcomes, while policies that disproportionately impact Marines of color and women can drive out those talented, diverse leaders needed to shape the corps of tomorrow. And unhealthy behaviors such as those described above can continue to harm Marines' physical and mental health for years after they leave the corps.

While this is an understudied problem, our research indicates that the Marine Corps' BCMAP is potentially harming Marines. We recommend that the Marine Corps pause the policy, similar to what the Air Force has done, while it further examines the effects of the policy on individual Marines' health and considers developing a new health-focused policy that includes requirements designed to reflect the diversity of the force.

Joslyn Fleming is a policy researcher at the nonprofit, nonpartisan RAND Corporation and Marine Corps Reservist. Jeannette Gaudry Haynie is a retired Marine and former RAND political scientist currently serving in the Department of Defense.