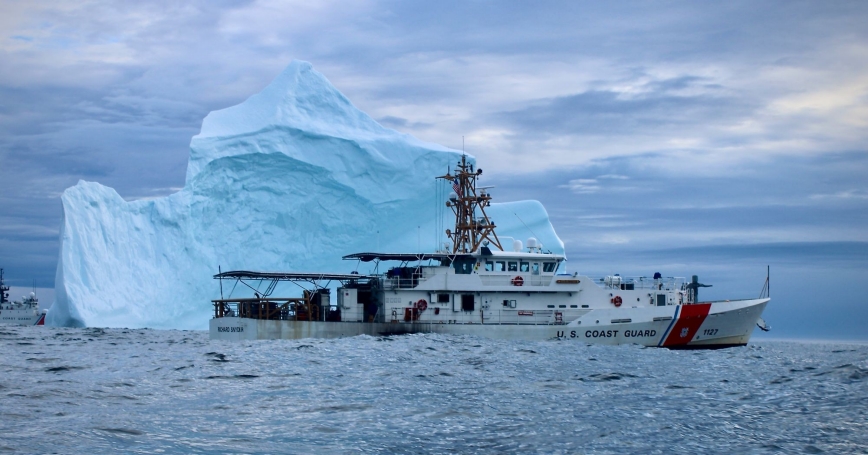 USCGC Richard Snyder takes part in Operation Nanook to enhance collective abilities to respond to safety and security issues in the High North, in the Davis Strait, August 13, 2021

Russian President Vladimir Putin's assault against Ukraine has broken all kinds of norms established since the Cold War. Now, his invasion even threatens to break those norms that were honored even during the Cold War, including some that served as vital mechanisms for managing the precious few areas of mutual interest and cooperation such as the Arctic, space, and scientific research.

Earlier this month seven Arctic countries—the United States, Canada, Greenland (Denmark), Iceland, Norway, Sweden, and Finland—announced that they were suspending collaborative work in the Arctic with Russia, the region's largest country, economic heavyweight, and current Arctic Council chair. This is by far the most severe and consequential break in cooperation the region has ever seen. Putin's invasion of Ukraine and the ensuing breakdown of Arctic diplomacy could be the moment when the Arctic ends its existence largely shielded from broader geopolitics—a privileged position that had benefitted all Arctic actors, national and subnational, for many decades. This could have several important impacts on the region and could potentially threaten the United States as well as its allies.

A first impact relates to the potential for conflict spillover to the Arctic. For centuries, the Arctic has been relatively quiet on the global stage. More recently, it has been ground zero for climate change. The idea of the Arctic “opening” to more business, trade, and resource extraction has become popular in the last two decades or so, along with fears of a “resource war,” although the vast majority of Arctic resources are not contested.

Yet, in the wake of ongoing violence in Ukraine at the hands of Putin, this far-northern region could be on a collision course toward becoming its own theater of war for the first time since the Vikings. In our recent work on Arctic governance, we describe a handful of credible catalysts for conflict in the Arctic that include accidental escalation in the face of strategic competition and challenges to the current rules-based order of Arctic governance.

Increased civilian or military activities in the region could increase the chance of a collision, nuclear accident, or misunderstanding that could rapidly escalate tensions between Russia, Western Arctic states, and even China. Escalation is made more likely by the fact that the Arctic is deeply important to Russia. Russia might see any intrusion (real or perceived) into the Northern Sea Route and the Barents Sea—effectively its vast northern border—as a grave threat.

The disbanding of regional cooperation removes the safety net that has kept conflict out of the Arctic for so long.

The disbanding of regional cooperation removes the safety net that has kept conflict out of the Arctic for so long. It also inhibits the tactical operators charged with securing their nations' respective borders in the region from accessing formal and informal mechanisms for avoiding surprise, stopping unintended escalation, and seeking assistance if needed. Cooperation among seven Western Arctic countries is still intact, but there is no easy making up for the absence of Russia, which owns just over half of the Arctic coastline and maintains formidable Arctic military capabilities.

A second plausible impact of the current crisis is the potential opening of the Arctic to China, to an extent that Russia might not have allowed before. Western companies used to be heavily involved in the Russian Arctic. But since Russia's 2014 illegal annexation of Crimea and support for separatists in Ukraine's Donetsk and Luhansk regions, China has become the principal foreign investor in Russian Arctic liquid natural gas and oil operations. The war being waged in Ukraine is tanking the Russian economy and along with it hopes for expanded development in the Arctic which is seen as critical for its future security. Meanwhile, China has been reasserting its friendship with Russia at a time when few other countries are doing so.

Both of these potential consequences of the current crisis happen at a time when the United States is still building Arctic capabilities that will more effectively address the security challenges in the region—but is not there yet. The United States currently has limited ability to maintain sustained presence in the Arctic.

Cooperation in the Arctic could be critical to averting disaster in a sensitive region where all countries contend with a challenging environment. Putin's actions could put the security and safety of the Arctic's 4 million residents, as well as the collective futures of countries encircling the region, in a more perilous situation than the region has ever known.

The authors' work has been funded in part through the RAND Center for Global Risk and Security.

This commentary originally appeared on The Hill on March 29, 2022. Commentary gives RAND researchers a platform to convey insights based on their professional expertise and often on their peer-reviewed research and analysis.