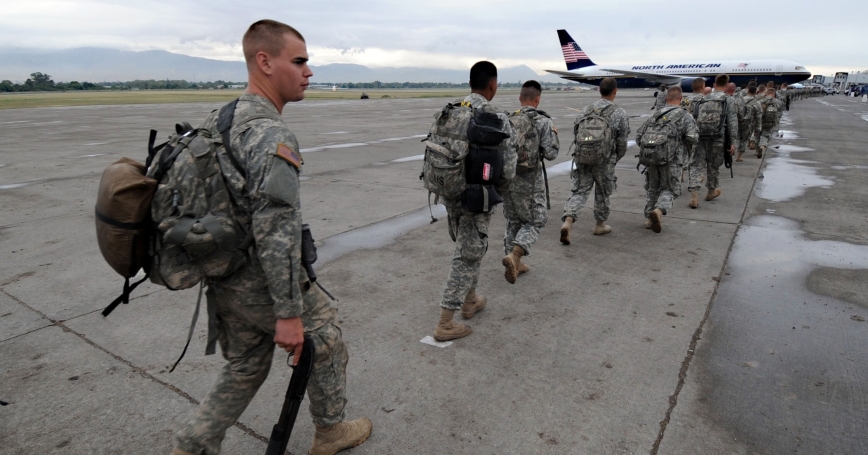 Soldiers assigned to the 82nd Airborne Division board a plane to return to Fort Bragg, North Carolina, March 6, 2010

by Jennifer Kavanagh and Bryan Frederick

In February, as the U.S. military was preparing for the release of President Biden's first National Defense Strategy, Russia invaded Ukraine, sending tens of thousands of additional U.S. forces into Europe, creating new demands for U.S. military weapons and security guarantees, and raising questions about how best to update and adapt years of planning to a new strategic environment.

Before Russia's invasion, the new NDS (PDF) was expected to identify China as the primary threat to U.S. interests, and the Pacific as the most likely theater for future conflict. While this prioritization will likely persist (PDF), it is now widely expected that the United States will also be more deeply involved in Europe for the foreseeable future. The war in Ukraine is not the first time—nor will it be the last—that the Department of Defense (DoD) has been forced to respond rapidly to unexpected threats or to reorient priorities when the assumptions guiding its force planning changed. The wars in Iraq and Afghanistan forced the military to hastily increase in size, acquire new capabilities, and develop new ways of fighting for which it had not previously prepared.

DoD force planning (PDF), balancing risk and resource constraints, is inherently challenging. The process attempts to hedge against future uncertainty by using tools like wargaming and operational analysis to generate estimates of the types and numbers of forces needed for a range of contingencies. But these methods are only as accurate as the assumptions that underly them. If planners make the wrong assumptions about the most likely types and locations of future wars, then the military may end up unprepared down the road, regardless of the quality of the analysis conducted. DoD force planners face the added challenge of long time horizons of five or more years away, given the long lead times needed for investments in different weapons systems or types of personnel.

If planners make the wrong assumptions about the most likely types and locations of future wars, then the military may end up unprepared down the road, regardless of the quality of the analysis conducted.

Statistical forecasting could equip force planners with a valuable additional tool for evaluating future demands and associated uncertainty. Statistical models could provide an empirically grounded perspective on likely future demands for U.S. forces by leveraging decades of social science research on the relationship between a host of geopolitical and structural factors: patterns in trade, for example; or changes in alliances; or retrenchment in democracies; or even events, such as armed conflict or U.S. military interventions. Importantly, the goal of such models is less to produce precise forecasts than to identify early warning factors and to reveal information about the range of possible futures and levels of demand for ground forces—from low to high—that policymakers might face.

In recent work, sponsored by the U.S. Army and completed within the RAND Army Research Division, we put this idea into practice: developing a set of statistical models and using them to explore how demand for U.S. ground forces might change over time, and across a range of possible futures. Our underlying model has two main steps. First, we used research on factors that influence the incidence of armed conflict to forecast the likely frequency and types of conflict out to 2040. Since armed conflict is one important “demand signal” for military interventions, we used these conflict forecasts and RAND's extensive prior work on U.S. military interventions to project demand for U.S. combat, deterrence, or stabilization operations, as well as the approximate number of ground forces likely to be involved in each such operation. The models are probabilistic, which means that any one set of forecasts may be unreliable, but when run 500 or 1,000 times, we begin to generate a range of expected future demands that offer insight into possible high-end and low-end ground force requirements.

Our starting point was a baseline scenario where we imagined a “no surprises” future, where structural trends in the international environment remained on their current trajectory out to 2040. Some of the insights from our baseline analysis are no longer surprising. For example, the baseline model suggests a small but increasing risk of interstate war out to 2040, with the risk concentrated in Eurasia and the Middle East. After Russia's February 2022 invasion of Ukraine, this insight is likely to be incorporated into many types of defense planning.

More counterintuitive may be the models' consistent projection that a future, large-scale U.S. stability operation is more likely than not over the next two decades. While U.S. experiences in Iraq and Afghanistan have soured policymakers, and the U.S. public, on such operations, the models suggest that enduring instability and past U.S. involvement in regions of recurring conflict may nonetheless increase the likelihood of such a deployment in the decades to come. For defense policymakers, this is a reminder that even as the United States focuses on large-scale combat against near-peer countries, it may be advisable to retain expertise in the types of conflict the United States undertook during the stabilization missions of the past two decades.

Among the benefits of a statistical forecasting approach is that it allows us to easily create alternative futures by changing the underlying parameters. We can, for instance, imagine a global depression, and then observe how demand for U.S. ground forces changes. We explicitly considered several examples along these lines, and developed a publicly available interactive tool that allows users to extend the already completed analysis by creating their own underlying scenarios.

A statistical forecasting approach allows us to easily create alternative futures by changing the underlying parameters.

One such scenario, increasingly relevant to today's security environment, and that our research explored, was the implications of an ascendant China—particularly one that has made a decision to try to become a hegemon in the Asia-Pacific region, with its own expanded sphere of influence and regional trade bloc. In this scenario, we observed a more significant increase in both interstate war and demand for U.S. ground forces, compared to the baseline.

While the general risk of conflict associated with the emergence of a strong, revisionist China is spread across several regions, the greatest increase in demand for U.S. ground forces (and the greatest risk for a direct U.S.-China clash) occurs—perhaps counterintuitively—again in the Middle East and Eurasia. These are places where U.S. and Chinese interests intersect more indirectly, but where many of the states involved are more fragile, and therefore prone to conflict. Current DoD efforts to deter China focus on Taiwan or the South China Sea as likely locations of conflict, but our analysis suggests that in the event of an intensified U.S.-China rivalry, defense planning would benefit from considering a wider set of possible contingencies and resulting demands on U.S. forces.

The strong China scenario is not, however, the alternative future that has the highest rate of conflict, according to our model. The most significant increase in both conflict and demands for U.S. forces would stem from more starkly isolationist U.S. policies, in which the United States pulls out of alliances and ends its existing forward deployment of forces. While the model doesn't predict how policymakers might respond to the resulting significant increase in demand for U.S. combat interventions observed in this alternative future, the results suggest the value of forward presence and relationships with allies in reducing the incidence of interstate war.

Statistical forecasting models like ours are not intended to be a replacement for other means of anticipating the future. But, as the examples described here suggest, statistical models that are grounded in empirical data can provide a valuable supplement to more-traditional methods. They are, simply, a tool that allows for a more structured and robust exploration of the future, its implications, and our assumptions about it.

Jennifer Kavanagh is a senior fellow in the American Statecraft Program at the Carnegie Endowment for International Peace. Bryan Frederick is a senior political scientist at the nonprofit, nonpartisan RAND Corporation.