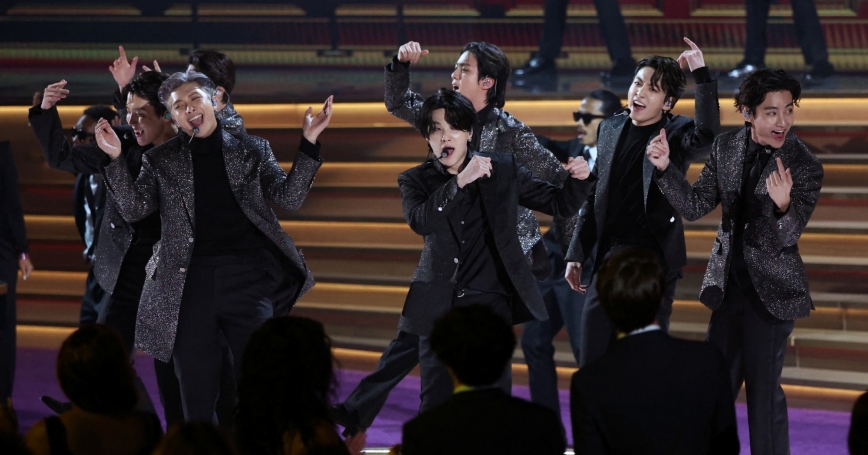 Last week's North Korean Intermediate Range Ballistic Missile (IRBM) launch, part of a renewed pattern of violations of U.N. resolutions, was a major concern for Japan, the Republic of Korea (ROK), and the United States. It could be time to get creative in seeking to deter North Korea's leader Kim Jong-un from future provocative acts. Could K-Pop, the global musical sensation, be part of the strategy?

Just over a year ago, Kim called K-Pop a “vicious cancer” corrupting young North Koreans' “attire, hairstyles, speeches, behaviors.” His state media has warned that if left unchecked, it would make North Korea “crumble like a damp wall.” Given that regime survival is Kim's number one objective, Kim clearly views ROK influences like K-Pop and K-dramas and other outside information as very serious threats.

Such outside information is toxic to Kim because it demonstrates to the North Korean people how the democracy and market economy of the ROK have given Koreans a superior existence to Kim's dictatorship and human rights violations. It is no surprise, then, that Kim has used COVID-19 to justify closing the North's border with China, which was the route by which most outside information had been entering North Korea.

What if the United States and ROK were to deliver to Pyongyang one million USB drives loaded with K-Pop, K-dramas, and other cultural information from the ROK, Japan, the United States, and other places? The mere threat of such an offensive, delivered by drones or balloons or some other method, could cause Kim to think twice before launching missiles, conducting nuclear weapon tests, or taking other provocative actions.

Kim clearly views ROK influences like K-Pop and K-dramas and other outside information as very serious threats.

North Korea is banned by a series of U.N. Security Council Resolutions (UNSCRs) from performing ballistic missile launches. Nevertheless, on October 4 North Korea launched an apparent IRBM that flew over Japan, flying a total of about 4,500 kilometers. This was the North's 8th missile launch in just over a week.

The IRBM launch caused immediate concerns in Japan, in particular, because if the missile somehow failed, it could have hit Japan, and thereby potentially been interpreted as an act of war by North Korea. Japanese Prime Minister Fumio Kishida called it a “violent act.”

By ordering the launch, Kim apparently sought to demonstrate his ability to disrupt the peace and cause damage to the three allies. Kim apparently has absolute power in deciding to execute such provocations. He likely does so in order to demonstrate to his people and the world that he is a powerful leader, in contrast to his vast array of failures to provide the North Korean people the food and other goods that they need. The United States and many other countries expressed their concerns about this launch and his other provocations.

Yet neither the United States nor its two regional allies appear to have taken the kind of actions that might deter North Korea from launching this missile or subsequent missiles. For almost 70 years the United States and its allies have done an excellent job of convincing the Kim family not to invade the ROK again. But they have failed to deter many North Korean provocations, including some North Korean limited attacks, such as the sinking of the ROK warship Cheonan and the shelling of Yeonpyeong Island, both in 2010, and some 40 ballistic missile launches in 2022.

The United States does not have a track record of imposing sufficiently objectionable costs on Kim to deter his provocations. Yes, the United States has responded by claiming that it has an “ironclad alliance” with the ROK and Japan, but such statements have not deterred previous North Korean provocations. The United States has also said that this launch did “not pose a threat to U.S. personnel, or territory, or to our allies.” This was narrowly true because the missile did not hit such areas. But it was actually not true because of the threat felt by both U.S. and allied personnel in the ROK and Japan, the people in Japan having been told by the government to evacuate and shelter because of the risks posed by this missile.

The United States does not have a track record of imposing sufficiently objectionable costs on Kim to deter his provocations.

It could be time for the United States and ROK to consider whether or not to abandon the strategic ambiguity they have used in trying to deter North Korean provocations. Their threats to use “a strong and resolute whole-of-government response” to a North Korean nuclear weapon test or other provocations were obviously not enough to stop North Korea from launching six ICBMs or ICBM components earlier this year. And the failure to impose significant costs on Kim himself for those launches has apparently convinced Kim that he can continue to launch ballistic missiles and likely carry out other provocations without suffering serious costs.

Instead, the United States and ROK could take steps to show the people of North Korea some of the cultural output of their neighbors to the south. At the same time, the United States could threaten to enhance the budgets for Voice of America and Radio Free Asia if Kim launches more missiles, amplifying information sent to North Korea. The United States and the ROK could also threaten to enhance specific strategic military training in response to North Korean missile tests—more serious training responding to more serious missile tests.

The United States and ROK could be more specific and creative in seeking to deter Kim and the global popularity of K-Pop could be part of the strategy.

Bruce W. Bennett is an adjunct international/defense researcher at the RAND Corporation and a professor at the Pardee RAND Graduate School. He works primarily on research topics such as strategy, force planning, and counterproliferation within the RAND International Security and Defense Policy Center.

This commentary originally appeared on 1945 on October 11, 2022. Commentary gives RAND researchers a platform to convey insights based on their professional expertise and often on their peer-reviewed research and analysis.