Why Putin's Nuclear Gambit Is a Huge Mistake 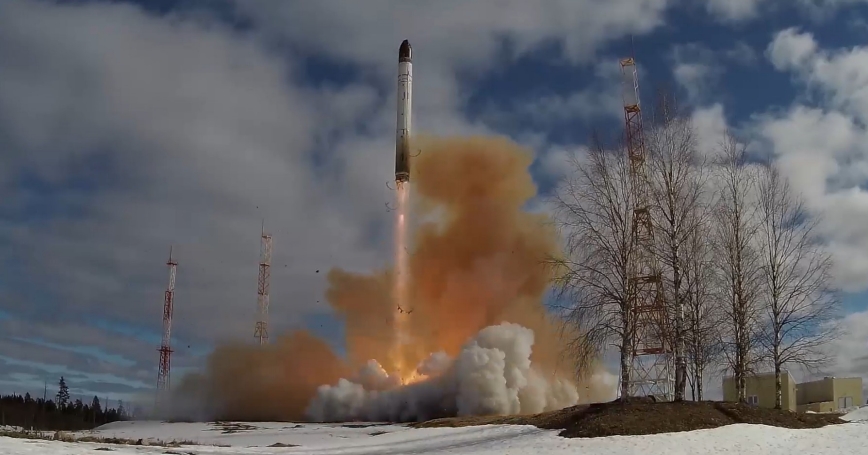 Photo by Ministry of Defence of the Russian Federation/Reuters

From the start of Russia's war in Ukraine, a segment of Western elite and public opinion—including politicians, experts, and commentators—has proffered any number of explanations about why the West cannot or should not support a Ukrainian victory. When the Russian invasion began in February, there was the argument that Russian military dominance would render Western support to Ukraine futile. Then, as the war dragged on, a claim emerged that although Moscow's initial plan for a lightning invasion was foiled, its forces would slowly but surely grind their way to inevitable victory. Now, as the Ukrainian military drives Russian forces into retreat, proponents of cutting a deal with Russia have settled on a new narrative: that the United States and its partners need to pull back on support for Ukraine, lest they actually corner Russian President Vladimir Putin and he, in turn, decides to blow up the world.

Behind this growing concern is the Russian military doctrine of “escalate to de-escalate”—that if Russia is facing the prospect of defeat due to Western conventional superiority, it would consider using nuclear weapons to force the West to back down. Today, Russia is losing in Ukraine. And while Moscow has threatened to go nuclear since the beginning of the conflict, the rhetoric of Russian leaders has recently become ever more apocalyptic. Unsurprisingly, the United States, Europe, and Ukraine are increasingly concerned that Russia will carry through on its nuclear threats.

Fear, however, should not drive the Western response to Russia's nuclear bluster. If Putin is still a rational actor, there are plenty of reasons why he would want to avoid nuclear use. And if he is not, then the West backing off may not make any difference.

For starters, Russian nuclear use makes little operational sense. So-called tactical nuclear weapons are blunt weapons with unpredictable effects. On the battlefield, the Ukrainian military has delegated operational decisionmaking to lower echelons and dispersed its forces, minimizing the size and importance of a target that could be wiped out by a nuclear blast. Depending on where the strike occurs, the fallout from the blast could kill plenty of Russians as well. And given the increasingly shambolic state of the Russian military, it is unclear whether the Russian military could fully exploit whatever tactical advantage Russia might gain from nuclear use. Indeed, press accounts paint Russian forces as lacking the discipline and the kit necessary to wage a successful conventional fight, let alone a nuclear one.

If Putin is still a rational actor, there are plenty of reasons why he would want to avoid nuclear use. And if he is not, then the West backing off may not make any difference.

Nor is it clear that nuclear use against a civilian target—Kyiv or another city, for example—would break the Ukrainian will to fight. Terror bombing with the aim of lowering a population's morale rarely works. In World War II, the German, British, and U.S. air forces all tried and failed to break civilian morale from the air; U.S. forces tried again in North Vietnam. If anything, these campaigns produced the opposite of their intended effect, as populations rallied around the flag and became even more determined to fight on.

Even the analysis around the lone previous example of nuclear use in war, the bombings of Hiroshima and Nagasaki, is often misunderstood. True, Japan surrendered after these attacks. This fact, however, overlooks two key points. First, Japan was already losing the war, so atomic use just sped up, rather than reversed, the battlefield outcomes. Second, even after the nuclear strikes, the Japanese leadership still debated about whether it should fight on.

Russia, were it to use its nukes, would immediately incur a significant strategic backlash. The United States and its allies have already promised “catastrophic consequences” if Russia uses nuclear weapons. While the Biden administration has not specified in public what these consequences may be, the United States and its allies have plenty of tools at their disposal, from economic measures—such as seizing, rather than simply freezing, Russian assets—secondary sanctions, and even conventional strikes on Russian forces in Ukraine. Finally, a certainly catastrophic, though admittedly unlikely, consequence to a Russian nuclear strike would be the United States striking back with a nuclear response of its own.

The political backlash Russia would face if it deployed its nuclear arms against Ukraine is also significant. Russia's international support, even among its friends, is already shaky. Just last month, India's Narendra Modi publicly scolded Russia; China has already expressed its concern; and Russia's other supporters—including Serbia and North Korea—have tried to distance themselves from Moscow's recent actions. All this is already happening now—before Russia were to cross the still-theoretical nuclear threshold.

Finally, there would be long-term consequences to Russia's nuclear actions. If Moscow carried through on its threat, it would forever change the international security environment. Say Russia's gamble succeeds, the Western coalition backing Ukraine is as weak and divided a coalition as Putin thinks it is, and the West eventually forces Ukraine to back down. This would then likely set off a wave of nuclear proliferation—particularly in states close to the Russian border seeking to preserve their independence. Many of these newly nuclear states would, presumably, have their weapons trained on Russia. Again, if only to protect their own sovereignty.

By contrast, if the gamble fails and Ukraine continues to fight on with Western support, the West may conclude that it still can fight through Russian nuclear use—albeit at horrific costs. If this comes to pass, Putin will have undercut his sole remaining source of leverage: the West's fear of his nuclear arsenal. Either way, in the long run, Russia loses.

By any rational calculus, then, Russian nuclear use does not make strategic sense. But what if Russia, and Putin in particular, is not entirely rational? This is a nontrivial possibility. After all, any weighing of the costs and benefits before February would probably have concluded that an invasion of Ukraine did not make strategic sense for Russia. Now, Putin may feel too angry or humiliated to back down. He may truly believe that Russia's destiny is to restore its empire. Alternatively, he may fear that the domestic political consequences of backing down outweigh the risks of nuclear escalation.

But if Putin is drawn to nuclear use in humiliation or anger, then backing off support for Ukraine would do little to change the current trajectory of the war. Even if the United States were to push Ukraine to freeze the conflict, Russia would still, in all likelihood, remain feeling humiliated and aggrieved. After all, many predicted that this war would last mere days, yet it has dragged on for months. The Kremlin wanted to “demilitarize and de-Nazify” all of Ukraine, not just control the territories it currently occupies. And Russia will have suffered tens of thousands of casualties. The aura of its military might remains shattered. Cutting a deal, therefore, is unlikely to placate the emotional impetus for Putin's nuclear threats; rather, it would only give Putin and his inner circle more time to nurse their grievances, arm up, and try again.

Cutting a deal is unlikely to placate the emotional impetus for Putin's nuclear threats; rather, it would only give Putin and his inner circle more time to nurse their grievances, arm up, and try again.

Giving in to Russia's nuclear blackmail does not solve Putin's domestic problems, either. Even with the war on hold or outright over, the Russian elite would remain in turmoil. Already, prominent Russians have died under mysterious circumstances, while others are calling for the defense minister to commit suicide and openly ridiculing the senior military ranks. Hundreds of thousands of Russians have fled the country. Western sanctions continue to take a bite out of the Russian economy, and the impacts are expected to increase over time. Russia will have to reintegrate hundreds of thousands of angry veterans, all of whom who have been at some level desensitized to violence; some very likely committed war crimes. Even if none of these factors threaten the regime itself, Putin likely will need further concessions from the West—including sanctions relief—if he wants to relieve internal pressures. Threatening nuclear use remains one of his last sources of leverage.

Above all, if Putin is no longer a rational actor, as some fear, then Ukraine and its Western supporters may have no other choice than to fight on. What, after all, is the alternative? The glue that holds together any agreement—certainly one to end the war—requires that both sides honor their commitments over the long term. How does one negotiate for peace with a state that has proved itself irrational? Any lasting settlement may, at that point, simply not be in the cards.

The United States and its allies, of course, should be prepared in case Russia goes down the nuclear path. But letting their nuclear apprehensions overshadow all the other interests at stake in Ukraine makes little sense. Indeed, the only thing more terrifying than Russian nuclear use may be letting such fears drive and derail Western and Ukrainian strategy.

Raphael S. Cohen is the director of the Strategy and Doctrine Program, a RAND Project AIR FORCE program. Gian Gentile is the deputy director of the RAND Army Research Division.

This commentary originally appeared on Foreign Policy on October 19, 2022. Commentary gives RAND researchers a platform to convey insights based on their professional expertise and often on their peer-reviewed research and analysis.