70 Years of Innovation at RAND 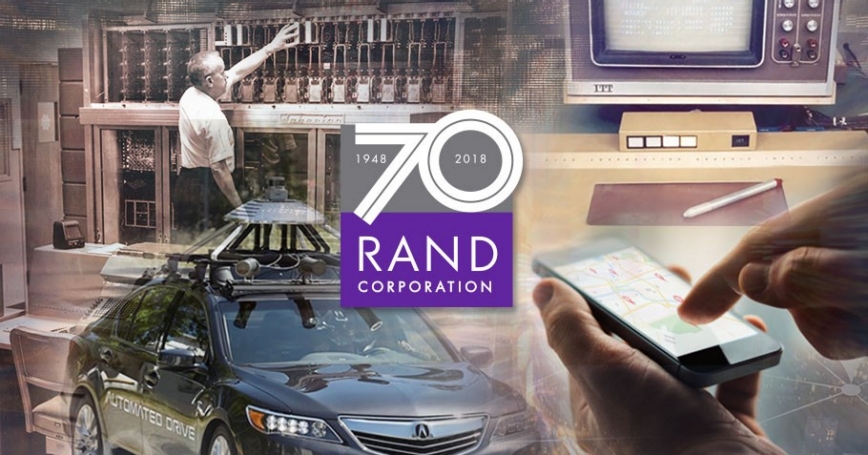 It's been 70 years since a small group of researchers decided to expand beyond their Air Force contracts and establish the independent RAND Corporation.

Their aim, as they explained in the articles of incorporation: “To further and promote scientific, educational, and charitable purposes, all for the public welfare and security of the United States of America.”

Within that mission, RAND researchers supported the early development of videotape, and invented one of the first email systems. They helped establish GPS as a public good, which is why your phone can now route you around a traffic jam. They provided the intellectual groundwork for the internet.

RAND has issued more than 23,000 public research reports and other publications in its 70 years. Here are four of its projects that changed the world.

By the 1950s, scientists at RAND were pushing the U.S. government to get a satellite into space. The first report RAND ever issued, in fact, had anticipated the Space Age: Preliminary Design of an Experimental World-Circling Spaceship. RAND scientists had worked out weights and velocities, fuels and trajectories. But they had a problem.

The satellite's main purpose would be reconnaissance, especially of the Soviet Union. The scientists wanted to record video images onto a storage tape, and then beam the images to the ground. But nobody had figured out how to record video with anywhere near the quality they would need.

RAND began working with a California company called Ampex. It had worked with crooner Bing Crosby to perfect audio tape recording and was starting to experiment with video. In 1956, as part of a secret satellite program known as Project Feed Back, RAND contracted with Ampex to develop a system that could record higher-resolution video on magnetic tape.

RAND and Ampex eventually concluded that such a system would require advances in tape recording that were still on the horizon in the mid-1950s. But during their partnership, Ampex completed and introduced the world's first commercially successful videotape recorder. It wasn't strong enough to capture Soviet activities from space, nor small enough to fit in a satellite—but it forever changed the evening news and launched a new era of videotape.

The Soviet Union beat the United States into space a few months later with its first Sputnik satellite. Racing to catch up, the U.S. redefined Project Feed Back to incorporate another RAND idea, a satellite that could drop its surveillance images back to Earth in recoverable packages, rather than store and transmit them. That influenced the development of the CORONA program, which sent 121 satellites into space between 1960 and 1972.

Paul Baran was trying to solve a question of the Cold War: How to keep official lines of communication open in the devastated aftermath of a nuclear attack. His answer helped provide a framework for the internet.

At the time, in the early 1960s, messages zipped from Point A to Point B through a series of central switches. Break a switch, and the message stopped. Baran envisioned a grid of smaller, high-speed transmission nodes. His idea was to break each message into digital data blocks, and then send each block into the grid to find its fastest way to the destination. There, the blocks would be reassembled into the full message.

Baran compared it to a game of hot potato. Each node would toss its message block to the next available node as quickly as possible. Even if several nodes were destroyed, the message blocks would simply bounce to other nodes and work their way around the broken links.

He presented his ideas in 1961, and later compiled them into a series of reports (a “frightening pile” of paper, he admitted in the introduction). At least one other researcher, a British scientist, had come to similar conclusions at around the same time. He called it “packet switching.” A few years later, the Defense Department's Advanced Research Projects Agency put their concepts into action, building an early network that it called the ARPANET.

That evolved into the internet we have today. Its basic architecture still relies on the idea of a distributed network that can find the fastest route for packets of information.

Baran was always modest about his contribution. He once compared the internet to a cathedral, built by many hands over many years. “New people come along and each lays down a block on top of the old foundations, each saying, ‘I built a cathedral.'

“If you are not careful,” he added, “you can con yourself into believing that you did the most important part. But the reality is that each contribution has to follow onto previous work. Everything is tied to everything else.”

It took little more than a few weeks in 1978 for RAND scientists to create what would become one of the most popular and influential email programs on the early internet. They called it MH, for Mail Handler, and it was so ahead of its time that even today, in our era of e-everything, some users still swear by it.

Mail Handler ran on Unix. Its genius was in treating mail messages like any other text file.

MH ran on Unix, the most advanced operating system at the time, and its genius was in treating mail messages like any other text file. That meant they could be saved, organized, searched, and sent with simple commands, without opening a separate email browser.

It never had the name, fame, or commercial success of an AOL or Gmail. But as a freely available, public-domain tool, MH built a loyal following of tens of thousands of users over the years. It was the email of choice for researchers and analysts in the early days of the ARPANET, influencing an entire generation of network engineers. Its descendent, now known as NMH, for New MH, was updated as recently as this year.

“It's the best email system around,” said Norman Shapiro, a longtime RAND mathematician who helped create MH. He still uses it every day and considers it his greatest intellectual achievement. “It's probably had more impact than anything else.”

RAND's interest in email didn't stop there. In the mid-1990s, researchers proposed a national universal email system. They recommended that every U.S. resident be given an email address, with public access to computers and economic assistance for those who couldn't afford network access.

RAND also published an early book of email etiquette in 1985. Sample advice: “Avoid responding while emotional” and “Sarcasm, humor, and irony often do not work.” Its authors, including Shapiro, lamented inboxes filled with unwanted notices about “cheese buying clubs, upcoming ski trips, and so forth,” and advised senders to limit the proliferation of junk email: “Shoot with a rifle, not a shotgun.”

Shortly after midnight eastern time on May 2, 2000, GPS receivers around the world picked up something extraordinary. Until then, the signals available to civilian receivers had always been distorted a little too much to make them reliable way-finders. But in those opening minutes of May 2, the commercial signals suddenly tightened into the precise beacons we know today.

It wasn't a technological breakthrough, but a policy one—and it was based in large part on a RAND study.

The satellites that make up the Global Positioning System were made for military use. As they circle the Earth, they broadcast their time and location; RAND's report called them “clocks in space.” A GPS device on the ground can use that basic information to calculate how long a satellite's signal took to reach it, and therefore how far it is from that satellite. With signals from at least four satellites, a GPS device can pinpoint its location anywhere on Earth.

But the satellites had always sent two different signals: a precise one for the military, and a somewhat scrambled one for civilian use. The idea was to keep enemy forces from using U.S. technology against the U.S. In the mid-1990s, though, the White House asked RAND to study GPS policy in general, including that signal scrambling, known as “selective availability.”

The resulting report, issued in 1995, ran to nearly 400 pages with appendixes. It found little evidence that selective availability was impeding the commercial development of GPS, but also little evidence that it was still a military necessity. More important, the report concluded, was the need for a clear statement from the U.S. that it would continue to fund and maintain the GPS system as a global gold standard.

A few months later, the White House issued just such a policy statement, pledging to maintain GPS for the future, free of user fees, and with a plan to eventually dial selective availability to zero. It made good on that promise just after midnight on May 2, 2000, instantly increasing the precision of the civilian signal by a factor of ten. GPS now helps regulate the flow of energy through the electric grid, provides time stamps for world financial transactions—and helps any number of rush-hour commuters find the quickest way home.

“It had all the characteristics of what makes a RAND report,” said Scott Pace, who led the study and is now the executive secretary of the National Space Council. “It took an objective, multidisciplinary, national-level view of the problem. It didn't try to focus just on the technology or just on the politics. It tried to answer the big questions: What does this mean? What are the options?”

Above all, it sought to balance—in the words of RAND's founders—the public welfare and security of the United States.

In the 70 years since RAND incorporated under that promise, its researchers have gone from working out calculations by hand to studying advanced artificial intelligence and autonomous vehicles. Its focus has expanded from the philosophical underpinnings of the internet to the very real threat of “Truth Decay” that the modern internet has made possible. The same objective, multidisciplinary approach it took to GPS now guides its analysis of everything from child welfare to health insurance to gun policy in America.

It's like building a cathedral, as Paul Baran once said: Each contribution builds on those that came before. “Everything is tied to everything else.”