Education and Employment Should Be One System, Not Two 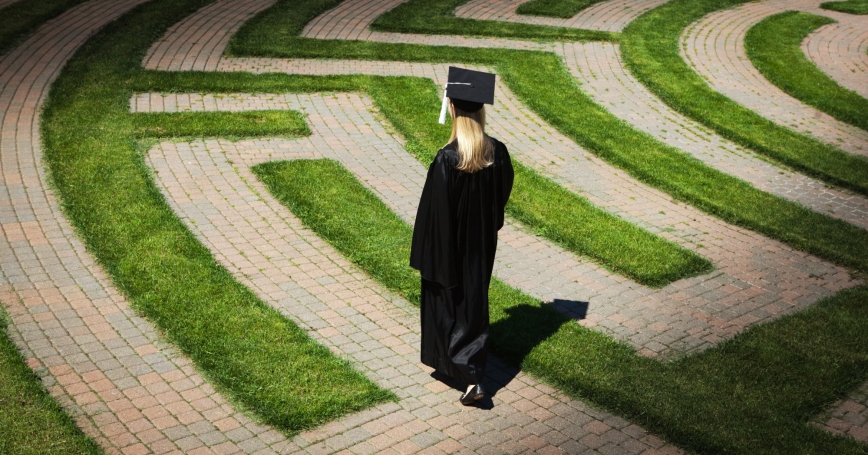 It's 2020, but too many American workers still aren't getting the education and training they need to compete in the 21st century. Something's not working here, and it's not just the few million people struggling to find jobs.

A new RAND report argues it's our entire system of educating and employing people, from their first day at school to their last day on the job. We are preparing workers for a labor market that no longer exists, researchers concluded, and then sending them flat-footed into a world of dizzying change.

What would it take to fix that? To answer that question, the researchers asked another: What if we just scrapped everything and started over? What would we want the American education and labor system to look like if we built it from scratch?

A good education, reformer John Dewey once proposed, is one that helps young people develop “in an orderly, sequential way into members of society.” He was writing in 1934, but that's still a pretty good description of how we prepare the next generation for work and for life. It's orderly. It's sequential. You go to school, you get a job, you retire.

Two-thirds of employers do not think people are graduating with the skills they need to make it in the 21st-century labor market.

But the world doesn't work that way anymore.

“Things are changing so rapidly that we can't necessarily prepare people for the jobs they're going to be doing in 20 years,” said Lynn Karoly, a senior economist at RAND who coauthored the new report. “We don't really even know what things are going to look like in five years.”

A recent survey found that two-thirds of employers do not think people are graduating with the skills they need to make it in the 21st-century labor market. It's not enough anymore to ace reading and math; employers want to see teamwork, communication, an ability to take information and do something new with it. They want workers committed to keeping up with the ever-changing demands of the workforce.

That means education does not stop with a diploma. Workers in all industries need to become lifelong learners—and employers, educators, and policymakers need to accommodate that new reality. The system needs to work less like a career ladder, with workers climbing rung after rung, and more like a freeway, with offramps for workers to refresh their skills, earn new certificates or credentials, and then merge back in.

There are places where that is happening already. In the coal counties of Appalachia, for example, community colleges have teamed up with employers to help workers retool for the burgeoning natural-gas industry. Germany offers its workers education savings accounts that they can use to pay for continuing education.

The system needs to work less like a career ladder and more like a freeway, with offramps for workers to refresh their skills and then merge back in.

“The key takeaway from our report is that there isn't any one single pathway anymore,” said Melanie Zaber, the lead author and an associate economist at RAND. “We need to find ways to support workers on a multitude of pathways.”

Technology is often cast as the great disruptor in this kind of future workforce planning. One recent poll, for example, found that nearly 20 percent of workers doubt their jobs will even exist in 20 years. Another study tried to identify jobs that will be least susceptible to computerization (think recreational therapists and elementary school teachers) and most susceptible (insurance underwriters, sports referees, and, at the top of the list, telemarketers).

But technology is as much a part of the solution as the problem. Better use of online learning and digital credentials would give workers more opportunities to keep their skills current. Greater acceptance of telecommuting would keep some people, such as older workers, in the workforce longer, and help others match their skills to jobs, no matter how distant.

But beyond that, a workforce training system for the 21st century needs to be built on data. We should be tracking workforce demand in real time, forecasting when and where skills will be needed in the near future, and communicating that to educators and workers. Employers should not find themselves with jobs to fill and too few qualified candidates. Students and workers should not have to plan their futures with incomplete or outdated information about what their future prospects look like.

We should track workforce demand in real time, forecast when and where skills will be needed, and share that data with educators and workers.

One way to accomplish that is with an electronic training record, the researchers wrote—a searchable resume, updated in real time, of a worker's education, skills, credentials, and work history. There are obvious privacy concerns here, and federal law flatly prohibits tracking some education details like that. But done right, such records would allow workers and employers alike to better match qualifications to job openings.

“We need to experiment with new ideas, see what works and what doesn't, to help us move toward the transformation that's needed,” Karoly said. “There's some inertia in the system. It worked for an era, but now we need to revamp.”

To stay competitive on the shifting grounds of the 21st century, that system needs to make sure people have equitable access to opportunities and learning throughout their working lives. It needs to do a better job of matching and rematching skilled workers with open jobs. And it needs to recognize that education and employment are no longer two separate arenas, but two parts of the same whole.

For workers, the payoff from that shift in thinking could extend well beyond the hours of 9 and 5. A good job has been found to be as important as good health in predicting someone's quality of life.