How Schools Adjusted to Life Under COVID-19 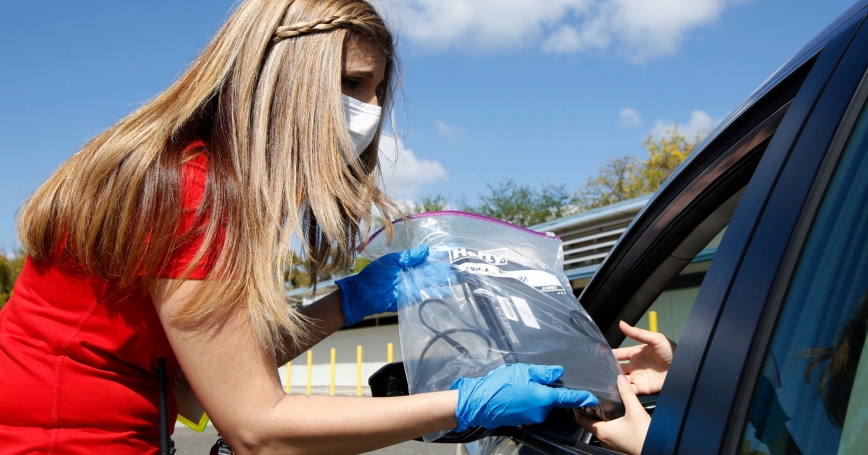 The principal at Phoebe A. Hearst Elementary School hands a laptop to a student's parent in Sacramento, Calif., April 10, 2020

As parents, teachers, and students learned the hard way this year, not many schools had a plan in place to guide them through an extended school closure. When COVID-19 emptied classrooms from coast to coast, it was—as one school official in Maine said—“literally like building a new educational system overnight.”

That's the main story, but not the whole story, from a RAND survey of school principals in the immediate aftermath of those COVID closures. Some districts, in fact, had thought through what an extended closure would look like, and how they would keep students engaged and learning at home. Principals in those districts were much more likely to say they expect no drop-off in student performance.

“Schools need to get serious about getting these plans and their technology infrastructure into place,” said Heather Schwartz, a senior policy researcher at RAND who focuses on pre-K to 12 educational systems. “During a disruption, what are you going to do? It could be a fire, it could be flooding, a hurricane, it could be influenza or some other type of pandemic. You can't just go buy 1,000 iPads and think you're done.”

She and other researchers at RAND had raised concerns in recent years about whether schools were prepared for the disruption of a long closure. When hurricanes swept through the Houston area in 2017, for example, they tracked more than 1,000 schools that had to close for ten or more days. Few offered any kind of distance learning.

Then came the total school lockouts of COVID spring. Within the span of a few weeks in March and April 2020, nearly every school in America had to figure out how to make distance learning work. Some handed out thick packets of homework for students to do on their own. Others handed out laptops and mobile hotspots.

To better understand how schools were adjusting to life under COVID, researchers turned to a unique panel of experts, the RAND American School Leader Panel. The panel provides a pool of school principals who participate in periodic surveys on school issues; a separate but similar panel covers teachers. Researchers were able to ask nearly 1,000 principals about what they were experiencing on the ground.

Nearly two-thirds of the principals said their schools had provided laptops or other computer devices prior to COVID-19, at least to students in need. Yet fewer than half said they had trained teachers to deliver online instruction or were offering fully online or blended courses. Only one in five said they had made plans before the pandemic to deliver instruction during a prolonged school closure.

Only one in five principals said they had made plans before the pandemic to deliver instruction during a prolonged school closure.

“That's the number that I find most concerning,” said Melissa Diliberti, an assistant policy researcher at RAND, a Ph.D. student at the Pardee RAND Graduate School, and the lead author of the report. “It really shows that few schools had this concept of a prolonged closure in mind as something that could realistically happen. I hope that number is going to be a lot higher now that schools have had to live through this.”

The more prepared a school was, the researchers found, the more likely it was to continue giving letter grades during the pandemic. The most prepared schools, in fact, were 20 percentage points more likely than the least prepared schools to stick with letter grades. And principals in schools that had a closure plan in place were less likely to say they expected a lower level of student achievement this fall than they saw last fall.

Large schools were more likely than small schools to have taken some preparedness steps pre-pandemic, such as training teachers to deliver online instruction. Middle and high schools were better prepared than elementary schools. And schools with high numbers of students receiving free or reduced-price lunch, a marker for poverty, were just as prepared, or unprepared, as schools with lower numbers.

The results point to a striking need for better planning at schools—and to the difference that could make in the lives of millions of students.

“COVID is going to leave a lasting impression on everyone who's alive right now,” Diliberti said. “We're all going to have a sense that this might not be the last time that something like this could happen. Schools and districts are going to have to respond with plans to address long closures—not if but when they happen again in the future.”

Most principals in RAND's survey didn't seem to argue with that. Fully 85 percent of them said one of their top priorities when schools reopen will be planning for the next big closure.