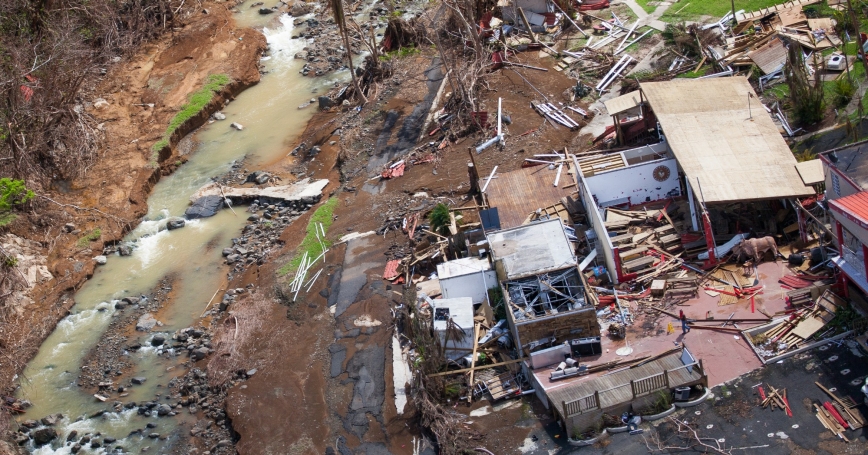 Aerial view of a damaged home in the mountainous area of Barranquitas, Puerto Rico, October 9, 2017

Marielena Lara is a senior physician policy researcher at RAND leading program initiatives to improve the health and social well-being of vulnerable communities. She has spearheaded interdisciplinary teams and multisectoral partnerships in action-oriented implementation and policy research to reduce inequities in health care and community systems.

Her projects have benefited children with chronic health conditions, immigrant workers, women at risk of breast cancer, and victims of natural disasters. Lara is an expert in data collection and analytic approaches with non–English speaking and racially and ethnically diverse populations. Her multilingual communication expertise includes producing educational and other content in print, audio, and video form in English and Spanish. She was born and raised in Puerto Rico by Cuban parents.

Hurricane Maria hit Puerto Rico with such force in September 2017 that one meteorologist compared it to a 50-mile-wide tornado. It peeled roofs from houses, turned roads into rivers, and left millions of people without electricity or safe drinking water. It was one of the strongest and deadliest hurricanes to ever hit the United States.

In its aftermath, the Federal Emergency Management Agency asked RAND to assess the damage and recommend a path toward recovery. Working with local and federal officials, researchers identified tens of billions of dollars in projects to rebuild the island physically and economically. Their recommendations covered more than a dozen sectors, from water to housing to schools to health care.

But funding has been slow to arrive in hard-hit communities across Puerto Rico. Marielena Lara, a senior physician policy researcher at RAND, and policy analyst Gabriela Castro partnered with local foundations and experts to support communities as they continue the work of recovery. “We saw a window of opportunity,” Lara said, “to empower citizens and nongovernmental organizations [NGOs] who are the active participants in Puerto Rico's reconstruction and recovery.”

What was your experience on the morning Hurricane Maria made landfall?

When you grow up in Puerto Rico, you think of hurricanes the way people elsewhere might think of snow days. The kids are out of school, everyone gets ready, but it's not necessarily that serious. Maria was different.

It was 3:15 a.m. in California, where I live, when Maria made landfall in Puerto Rico. I couldn't sleep. My friends were posting about how a monster had descended on the island, with videos of horrific winds unearthing trees, rattling roofs. And then—nothing. Everyone on the island had lost power.

I was born and raised in Puerto Rico, so this was a disaster that struck a deep personal chord. That's why I was so heartened when RAND was asked to provide support for the preparation of Puerto Rico's recovery plan, and grateful to be part of it.

What was RAND's role?

We saw a window of opportunity to empower citizens and NGOs who are the active participants in Puerto Rico's reconstruction and recovery.

The Homeland Security Operational Analysis Center worked with the government of Puerto Rico, mayors, community leaders, experts, and citizens to support the development of the recovery plan. In a nutshell, it was about conducting a broad assessment of damage and needs across the island. It was a Herculean task, in an extremely compressed time frame. Cynthia Cook, a senior management scientist at RAND, led a team of more than 100 RAND researchers who worked around the clock on it for six months.

None of it would have happened without our longtime partners at the University of Puerto Rico. They had worked with me and RAND for more than 15 years and played a paramount role in collecting and analyzing data and securing the collaboration of other local partners.

How has your work in Puerto Rico continued and evolved since then?

Very little recovery was occurring, even years after the hurricane, in part because of delays in federal funding. We wanted to bring the results of our policy analysis to the community, to local foundations and other NGOs, to strengthen their ability to prepare for and respond to natural disasters.

COVID-19 prevented us from holding the face-to-face workshops we had planned. Instead, we convened virtual conversatorios, roundtable conversations, on Zoom with local NGOs. Our agenda was just to talk about the findings from our recovery work and give the NGOs an opportunity to react or expand on them.

What did you hear from them?

They echoed one of the major themes of the recovery plan, which was that it is necessary to involve community and local partners in developing and implementing any plan. Almost all of them talked about how funding was the most important barrier to recovery. Without funding, nothing would come from even the best plan. They saw problems with the bureaucratic process to apply for funds, the financial risk of a reimbursement-only payment plan, and the difficulties with centralized funding.

Finally, they offered potential solutions, some of which they were already implementing. They suggested intermediary organizations that could channel funds and help NGOs write proposals, or umbrella groups that could bring together many NGOs to apply for funding together.

What are the next steps?

We would like to hold a second series of conversatorios, to talk more about lessons learned with local community organizations and NGOs. That could point toward strategies that would help government entities and the private sector, thus informing disaster policy at both the local and federal levels.

We would also like to continue to engage with communities and other partners in Puerto Rico. We're hoping to support the government of Puerto Rico and other clients to formulate strategies to strengthen the implementation of the recovery plan going forward.

Disasters are a lot about equity. Systemic inequities tend to magnify the negative impacts of disasters on disadvantaged populations, and prolong the process of recovery for vulnerable communities and individuals. We want to continue to be part of developing policy approaches that help address the root causes of inequity in disasters, not just in Puerto Rico, but around the world.