How Educators Are Faring in the COVID Era 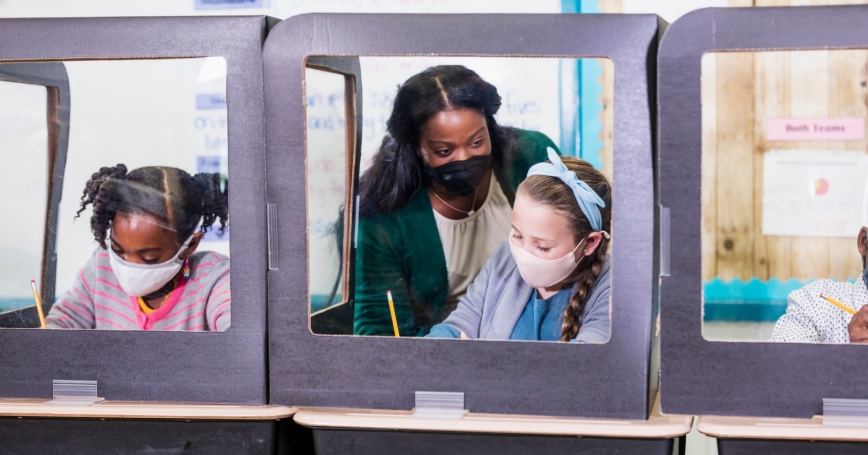 Sheena Graham—“Mama Graham” to her students—knew it was time to go. She had always thought of her music classroom as a sanctuary. Now, in the third year of a pandemic, with students struggling and politicians arguing about mask mandates and critical race theory, it didn't seem like much of a sanctuary anymore.

In big cities and small towns, teachers and principals are hurting. A recent RAND survey found they are twice as likely as other workers to experience frequent job-related stress. They report higher rates of depression and burnout, and much lower rates of resilience. Nearly a third are so disillusioned that they are considering leaving the profession—and the number is even higher among teachers of color, many of whom say they have faced discrimination from colleagues and parents. 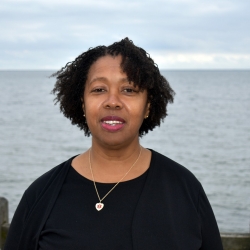 There was no single moment that convinced Graham it was time to leave the profession she loves. There were many. But one that sticks in her mind is a boy railing against a school mask mandate and scoffing at the threat of COVID, just feet away from another student, sitting silently, who Graham knew had just lost several family members to it. She almost made it to 39 years of classroom service—almost.

“What was going on in the world—all the arguing, the politics—it was creeping into the school,” she says now. “Within the four walls of my classroom, it was hard to be able to nurture everyone and make each student feel valued and help each one find some place of comfort amidst so much anger.”

“I think what it came down to is this,” she says after a pause. “I felt like I was failing my students.”

RAND's survey asked nearly 2,500 public school teachers and more than 1,500 principals about their working conditions and well-being midway through the 2021–2022 school year. Researchers also fielded similar questions to hundreds of working adults across the United States, to see how their answers compare. The results depict an educational system operating in crisis mode, still reeling from the effects of the pandemic.

Teachers said their biggest source of stress was helping students make up lost ground after more than two years of school disruptions. More than half also said they had been asked to take on extra responsibilities—even filling in as nurses, bus drivers, or cafeteria workers—to cover staff shortages. Principals said they worried about the mental health of their teachers and staff.

More than 60 percent of educators said they had felt down, depressed, or hopeless at some point in the past two weeks. Nearly a quarter of the teachers said they were not coping well with their job-related stress—twice the rate of other workers. That could leave a lasting mark on a generation of students: Previous research has drawn a direct line between the health and well-being of teachers and the academic performance of their students.

“Teaching is stressful, and it may always be stressful,” said Elizabeth Steiner, a policy researcher at RAND who helped lead the survey. “But it's important for teachers and principals to be in a position to manage that stress and not feel so burned out that they disengage.”

How to Improve the Well-Being of Educators

Sheena Graham made it through the pandemic but returned to a school that did not feel the same. She learned that she had lost her classroom—she'd be teaching music room-to-room instead—not from any official announcement, but from student texts. A district administrator refused to wear a mask near her, even though, as an older Black woman, she was at high risk of catching COVID. She had been named the teacher of the year in Connecticut just before the pandemic, in 2019, and thought she had a good four or five more years left in her career—until this year.

The pandemic “forced some things to come to the surface,” Graham said. “I felt less valued. Even in the public's view, as we fought to get schools safe and get precautions into place, people would say, 'Oh, teachers are just being selfish.' But we're fighting for your kids!”

Educators in RAND's survey were two or three times more likely than workers in other professions to say political issues were sources of stress in their jobs.

Educators in RAND's survey were two or three times more likely than workers in other professions to say political issues were sources of stress in their jobs. Many said managing student and family concerns about mask mandates and other COVID measures had been especially stressful. Some also cited local and national debates over the teaching of race, racism, and bias. More than a third of surveyed teachers, and nearly two-thirds of principals, said they had experienced harassment over their school's policies for COVID safety or for teaching about race, racism, or bias, mostly from parents or other student family members. Those who did were twice as likely to say they sometimes fear for their physical safety at school. 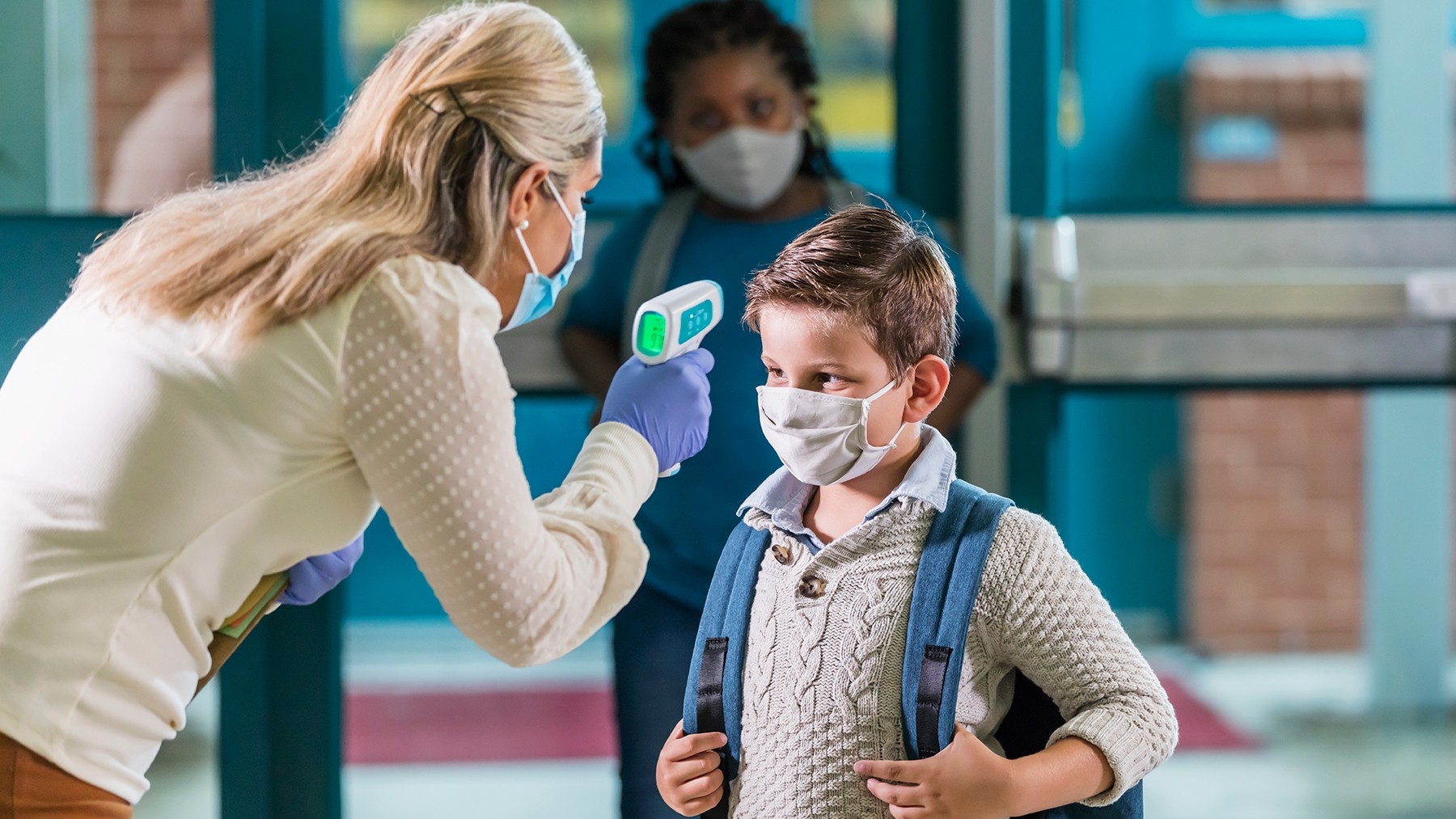 On top of that, a significant minority of educators of color—36 percent of teachers and 48 percent of principals—said they had experienced at least one incident of racial discrimination in the first few months of the school year. Black educators said parents and fellow staff members sometimes acted uncomfortable approaching them. Asian American, Native Hawaiian, and Pacific Islander educators said people sometimes assumed they were foreigners.

That helps explain why 41 percent of teachers of color said they intend to leave the classroom by the end of the year, compared with 31 percent of White teachers. That's not a reliable indicator of an impending wave of resignations: Previous research has shown that most teachers who say they're leaving end up staying. But it is a good measure of how dissatisfied teachers are—and reason for concern in a profession that already struggles to retain teachers and principals of color.

“That's a key indicator of well-being in and of itself,” said Sy Doan, an associate policy researcher who coauthored the study. “Districts need to ask: How can we make being in schools better for teachers? How can we make it more likely for them to stick around, particularly when teaching at this time has become so stressful?”

The educators RAND surveyed had some thoughts: better pay, smaller class sizes, and less time spent on non-teaching duties. They suggested more scholarships and student-loan forgiveness programs to bring more teachers—and especially teachers of color—into the profession. States and school districts could also provide more after-school counseling for educators, and better guidance on how they should handle high-tension issues like mask mandates. Educator-prep programs should consider adding conflict management to the curriculum.

The Love of Teaching

The survey results also suggest that something fundamental has changed in how schools and families relate to each other.

The survey results also suggest that something fundamental has changed in how schools and families relate to each other. The pandemic put physical barriers between them. Teachers became just one more face on a screen. School and district leaders now need to consider how they can reengage with parents and families, reestablish trust, and channel political conflict into more productive conversations about what students need.

Despite all this, more than 70 percent of the teachers RAND surveyed, and more than 80 percent of the principals, still said they were glad they had chosen to go into education. “I love being in the classroom. I love being with my students,” one teacher told the researchers in an interview. “But it has been an exhausting experience.”

That's how Sheena Graham feels, too—but she also knows that exhaustion, over time, becomes unsustainable. She doesn't regret leaving when she did, even though she's still trying to figure out what her next chapter will be, having retired years before she planned. She works with the choir in her church. She volunteers at a food pantry. She's started working with a group of retired teachers, pushing for better conditions for those still in the classroom.

“I believe in educators; I believe we have the ability to change the world,” she said. “Everybody knows the value of an educator, but they don't ever stop to think about it. Each and every person, if you ask them, they're going to bring up an educator who had a great impact on their life.”

Students at her old school have started a group for anyone who needs a little extra support and encouragement, a place to go when they're struggling—a sanctuary. They call it the Mama Graham club.