Abortion After the Dobbs Decision: Q&A with RAND Researchers 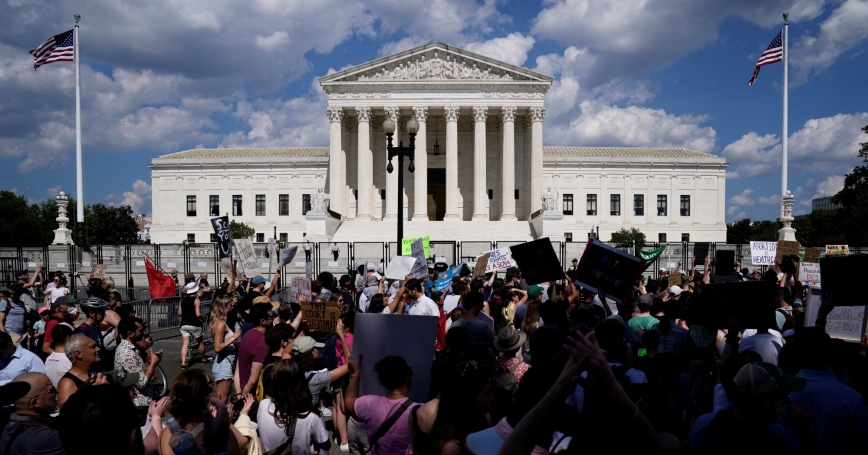 Abortion rights supporters protest outside the U.S. Supreme Court the day after its ruling that overturned Roe v Wade, in Washington, D.C., June 25, 2022

When the Supreme Court released its decision in Dobbs v. Jackson on June 24, Americans found themselves living in a country that, for the first time since 1973, did not promise a constitutional right to an abortion.

Some of the implications of this ruling were immediate, with the overturning of Roe v. Wade triggering abortion bans or additional restrictions in several states. Other ripple effects, however, will take time to understand as a clearer picture of post-Roe America emerges.

We spoke with several researchers at RAND about what the ruling could mean for vulnerable populations like service women and pregnant women with substance use disorders, the whirlwind of misinformation surrounding abortion, and what the policy response might look like.

Let's start by talking about reproductive care in the military. Recent RAND research shows that about 40 percent of service women and DoD civilian women now have either no access or severely restricted access to abortion services where they live or are stationed. What else can research tell us about how much these populations could be affected by new bans and restrictions?

Sarah Meadows: Perhaps one of the most important things that the Women's Reproductive Health Survey of Active-Duty Service Members can tell us is the number of active-duty service women who seek abortion care annually. We found that number to be somewhere between 2,600 and 4,100 service women.

The survey also gives us some information on the rate of unintended pregnancies that occur among active-duty service women. An unintended pregnancy is not the only reason why a woman would seek abortion care. But it is one reason where we know there are policy and behavioral options that could help prevent unintended pregnancies and consequently might reduce the demand for abortion—particularly among women who might be stationed in a state where their access to abortion is severely restricted or completely banned.

Now, the thing we don't know is how those abortions are distributed across states. But we do know that there are certain states that have a very large military presence—like Texas, like Florida, like Georgia—that have some of the most-restrictive abortion laws or even outright bans.

Service members often can't perform their job duties while pregnant, especially if they're in a job that's very physically demanding like working in an aircraft or on a ship.

Kyleanne Hunter: When the Supreme Court decision came down, the majority opinion essentially stated that the right to an abortion should be determined at the state level. First, there's very little choice for service members as to where they live. And unlike many civilians, service members can't just travel on a whim to a neighboring state whenever they want to—you actually have to be approved to travel.

Another reason service members are uniquely impacted is the type of jobs that they're often required to do. Service members—particularly junior service members—often can't perform their job duties while pregnant, especially if they're in a job that's very physically demanding like working in an aircraft or on a ship.

Finally, because of the Hyde Amendment, TRICARE—the health care program for active-duty service members and their families—restricts the types of abortions covered by insurance, which is different than some civilian insurance plans. So, it's less likely that insurance would cover abortion care that's needed.

Meadows: In one paper, Kyleanne and I wrote about a hypothetical scenario in which a junior enlisted woman who is stationed in Texas would need to travel to Kansas, which is the closest place she could get an abortion post-Roe. If you add up travel time, hotels, and gas prices—the cost is now over half her monthly salary.

On top of that, she needs to ask for permission to leave. She may not be feeling 100 percent physically immediately after this procedure, and so there may be duty restrictions that she has to deal with. There is a lot of thought and effort that service women will have to put in to be able to receive this health care.

Hunter: That said, just last week the Department of Defense responded to the ruling by committing to update military policies to protect service members' access to reproductive care, including abortion.

Another group likely to be disproportionately affected is pregnant women with substance use disorders (SUDs). What makes this group particularly vulnerable?

While they're pregnant, people with SUDs also have a higher risk of severe maternal morbidity and even death around the time of childbirth. Then, in the first year after birth, they're at high risk of dying from opioid overdose during that very vulnerable period.

From the preconception period to the postpartum period, it's a really challenging time for these women. Women with SUDs need more care, more support, more access to prenatal care and postpartum supports, and more evidence-based substance use disorder treatment. When you limit reproductive choice for these women, it does the exact opposite.

Abortion bans that arise from the Dobbs decision could make it even more challenging for this already stigmatized group to feel comfortable seeking treatment for their SUDs, regardless of the decision they end up making about their pregnancy.

Research has shown that punitive policies have been found to deter women from prenatal care and substance use disorder treatment. What implications could this have for women after the Dobbs decision?

Faherty: Punitive responses to substance use in pregnancy reflect the view that substance use somehow is a choice or a moral failing, rather than a chronic medical condition.

Punitive responses to substance use in pregnancy reflect the view that substance use somehow is a choice or a moral failing, rather than a chronic medical condition.

Over the past couple of decades, more and more states are adopting these punitive policies. For instance, in 2000, 12 states considered substance use in pregnancy to be child abuse, neglect, grounds for civil commitment or criminal act. Now, that number has more than doubled, so a total of 28 states, plus D.C. So, you can see that there's this momentum around punishing women for this chronic relapsing-remitting condition while they are pregnant.

Now, the expert consensus from more than 20 medical and public health organizations is that these punitive policies are going to discourage women from seeking necessary care, both for their pregnancy and for their behavioral health, as well as any other health conditions they might have.

The Dobbs ruling is just another example of a policy that limits access to care for women and people with capacity for pregnancy, and punishing them further has the potential to worsen the stigma that they already experience. It can make it harder for clinicians like me who take care of families affected by substance use to form and maintain a trusting patient-provider relationship.

Imagine for a moment a woman with a substance use disorder who is having a miscarriage—which is unfortunately a common outcome across all pregnancies. As my colleagues and I wrote about recently, the worry is that they could be doubly policed and therefore doubly punished if the pregnancy loss was assumed to be both intentional and perhaps caused by their substance use.

Even before the Dobbs decision, we know that the topic of abortion has long been subject to misinformation. What does abortion misinformation look like in practice?

Julia Rollison: One of the most common forms of abortion misinformation happens through crisis pregnancy centers, which often deploy deceptive tactics and present limited, extremely biased, or even in some ways unscientific or inaccurate health information. These centers tend to access individuals when they're at a vulnerable point in their decisionmaking process. In fact, there are more crisis pregnancy centers than there are abortion clinics in the U.S.

Another place we're seeing misinformation is when providers in certain states are required to present patients with consent forms that can include biased and inaccurate medical information. This can range from suggesting there's a link between abortion and breast cancer to inaccurate descriptions of certain physical features or functions at different gestational ages.

When your provider—someone who is often seen as a trusted source—is being required to share information that is not medically accurate, that is certainly problematic. It's an environment that makes it really tough for people to be able to make decisions around their medical care and is also very challenging for providers.

How might the Dobbs ruling affect this misinformation landscape?

Rollison: Before the Dobbs decision, the right to an abortion was protected federally. By moving it entirely to the states, it creates an environment where information could be different depending on where you live. Thus, where there are many different sources of information, there's more opportunity for misinformation within each of those ecosystems, and it becomes that much harder to contain. Misinformation around legality also becomes much harder to grasp, not only because laws vary by state in terms of potential bans, gestational limits, etc., but also because the landscape is rapidly changing.

As we talk about solutions, we also need to be more aware of groups being left out. For example, we're hearing about the role large employers can play in facilitating access to abortion and making coverage policies clear. But what about individuals who are unemployed? They're being left out of the conversation.

In general, there are large disparities in access to information about abortion services. For example, we recently wrote about the fact that those who might receive an abortion via telemedicine are those who have used telemedicine for other reasons in the past, and those people tend to be wealthier and more educated and thus less likely to face barriers to accessing abortion care. So, we need to think about what communities are being disproportionately affected and then think about how to get accurate information to everyone.