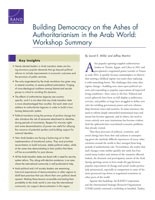 Building Democracy on the Ashes of Authoritarianism in the Arab World

After popular uprisings toppled authoritarian leaders in Tunisia, Egypt, and Libya in 2011 and precipitated a negotiated power transfer in Yemen in 2012, it quickly became commonplace to observe that ousting a disliked regime was easier than replacing it with something better. The challenges that come after regime change — building new, more open political systems and responding to popular expectations of improved living conditions — have come to the fore. Political and social upheavals have been on full display as politicians, activists, and publics at large have struggled to define new rules for wielding government power and new relationships between states and societies. Against this backdrop, the RAND Corporation and the Ankara-based International Strategic Research Organization jointly convened a workshop in Istanbul, Turkey, on April 24, 2013, to provide a private setting in which policymakers, opinion leaders, and experts from Arab countries could reflect collaboratively on how to overcome obstacles to democratization. Participants came from Egypt, Tunisia, Libya, Yemen, Syria, and Jordan, and included political party leaders, former ministers, current officials and senior political advisers, heads of research institutions, academics, and columnists. Participants' political affiliations varied considerably on the ideological spectrum, though the nature of the discussions was notably pragmatic rather than ideological. The workshop focused on four main topics: approaches to developing new political systems and political parties; security threats to democratization; the role of regional neighbors and the international community in supporting democratization; and lessons that can be learned from past experiences in other parts of the world.

The April 24, 2013, workshop summarized in this publication was made possible in part by a generous contribution to the RAND Corporation from Charles Zwick. Funding for the workshop and this publication also came through RAND's continuing program of self-initiated independent research.