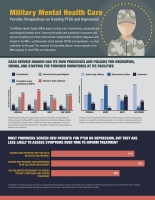 The Military Health System (MHS) plays a critical role in maintaining a physically and psychologically healthy force. Ensuring the quality and availability of programs and services targeting two of the most common conditions diagnosed and treated in the MHS — posttraumatic stress disorder (PTSD) and depression — is a key contributor to this goal. This research brief provides data on various aspects of the MHS capacity to treat PTSD and depression.

Each Service Branch Has Its Own Processes and Policies for Recruiting, Hiring, and Staffing the Provider Workforce at Its Facilities

Mental health providers who treat service members with PTSD and depression at military treatment facilities (MTFs) include those with prescribing privileges, referred to as "prescribers" (psychiatrists or psychiatric nurse practitioners) and those who traditionally provide non-pharmacologic treatments, referred to as "therapists" (doctoral-level psychologists or master's-level clinicians).

Most Providers Screen New Patients for PTSD or Depression, But They Are Less Likely to Assess Symptoms over Time to Inform Treatment

Screening and monitoring allow providers to accurately identify symptoms and help ensure that service members receive the appropriate course of treatment for their condition. The best screening instruments are evidence-based: They have been empirically evaluated for their reliability and validity.

Psychiatrists and PNPs Are Less Likely to Use Recommended Psychotherapy Approaches

Although more than half of providers use an evidence-based psychotherapy as their primary approach to treat service members with PTSD or depression, this rate is lower among psychiatrists and PNPs, particularly for PTSD.

Most evidence-based psychotherapies suggest therapists see their patients every week. Barriers to seeing patients as often as recommended include patients' military duties and therapists' scheduling limitations.

The vast majority of prescribers treat patients with PTSD or depression with medications that are strongly recommended for these conditions, such as specific types of antidepressant medication. However, 11% of these providers prescribed a medication that was potentially harmful to their most recent patient with PTSD (e.g., a benzodiazepine).

Providers often face barriers to receiving training to improve their clinical skills, such as travel limitations or lack of dedicated time in their schedule to attend workshops and seminars. Their schedules — or their patients' military duties — also prevent them from seeing patients as often as they would like. These are some providers' perspectives on barriers to training and providing recommended care.

Data on the number of active-duty military and government civilian providers are from the Defense Manpower Data Center's Health Manpower Personnel Data System; information on contractor numbers was provided by the Army, Navy, Air Force, and Defense Health Agency. Data on treatment approaches, session frequency, and barriers are based on responses to a RAND survey of mental health providers who had treated patients at a military treatment facility for PTSD or depression in the 30 days prior to the survey, conducted February-April 2016.