The U.S. Army uses Combat Support Hospitals (CSHs)—mobile, deployable hospitals housed in tents and expandable containers—to provide surgical and trauma care close to combat action. CSHs typically operate as hospitals only when deployed, and deployments occur only once every three to five years under the Army's rotational cycle. When not deployed, CSHs keep a partial set of equipment at home station for training or possible local emergency medical missions, while the remainder of the unit's equipment is in long-term storage at a site in the high desert of Northern California. This strategy of providing equipment for CSHs has created maintenance and obsolescence challenges. Nondeployed CSHs have old, poorly maintained equipment that is seldom or never used. Further, the Army has not programmed sufficient funds to keep all its CSH sets technologically current; in practice, deploying units do not deploy with their own equipment, but instead receive new medical equipment when deploying or take ownership of existing, upgraded equipment that is already deployed. RAND Arroyo Center researchers developed a new equipping strategy for the Army's CSHs, proposing three options for home station equipment sets: an “Expanded” design that provides more surgical and trauma capability and capacity; an “Enhanced” design that provides roughly the same amount of equipment but improved medical capabilities; and a “Lean” design that provides only enough equipment for some individual and team training. The research team also proposed changing the equipping strategy of deploying CSHs to eliminate much of the unit-owned equipment now residing in long-term storage. Deploying units would instead draw on a shared pool of up-to-date and well-maintained equipment. The proposed strategy would reduce total equipment costs from $1 billion to less than $700 million, leaving the Army with sufficient funds to continually upgrade and maintain both home-station and shared equipment.

The U.S. Army uses Combat Support Hospitals (CSHs)—mobile, deployable hospitals housed in tents and expandable containers—to provide surgical and trauma care close to combat action. A CSH is a 248-bed hospital staffed by approximately 500 personnel. Modular in design, it can also operate as two geographically separated hospitals (“split-based operations”), one with 164 beds and the other with 84 beds. CSHs provide the highest level of in-theater medical care available to American military personnel serving in active, deployed operations, including stabilization and surgical capabilities comparable to those in the trauma centers of major hospitals in the United States. Currently the Army has 29 CSHs, soon to be reduced to 26: 10 in the active component (8 in the continental United States and 2 forward stationed in South Korea and Germany) and 16 in the U.S. Army Reserve.

A CSH's ability to deliver high-quality medical care depends in large part on its possessing well-maintained, state-of-the-art medical equipment. However, a CSH's need for medical equipment is not stable but rather varies widely depending on whether it is preparing to deploy, deployed, available to be deployed, or returning from a deployment.

In addition, like all hospitals, CSHs must keep their medical equipment state of the art. Since much CSH equipment is not in continual use, items can become outdated while receiving limited or even zero use. Thus, questions arise regarding when equipment should be upgraded and whether it is worthwhile for the Army to keep equipment used for training or stored at SIAD upgraded to the same degree as the equipment being used by deployed CSHs.

The Surgeon General of the U.S. Army sponsored the research reported here to develop and evaluate alternative strategies for equipping the Army's CSHs that would meet their equipment needs in all phases of the deployment and redeployment cycle (the ARFORGEN [Army Force Generation] cycle). We employed a number of methods to execute the research. To gain an understanding of the perspectives of AMEDD (Army Medical Department) personnel on the current state of equipping and maintenance, we conducted focus groups, surveys, and interviews. We attended AMEDD conferences and visited key sites and organizations to conduct interviews. To understand costs and obsolescence risk, we analyzed data on CSH medical equipment maintenance, procurement, requirements, useful life, and obsolescence rates. To understand the prospective value and feasibility of alternative procurement strategies, we reviewed commercial and academic literature on leasing and conducted interviews with medical equipment procurement experts from hospitals, equipment manufacturers, and consulting organizations. To understand how alternative equipping strategies would perform over time, we used spreadsheet modeling and discrete event simulation.

The current equipping and maintenance strategy has left the equipment in some of these four pools in better condition than others, in terms of both maintenance and technological currency. Currently, most CSH units do not own and train on the most up-to-date equipment except when they are deployed to Afghanistan and Iraq, where they fall in on modernized-generation equipment sets established in those theaters. The sets in APS, consisting of six full CSH sets and one 44-bed EEHE, are also technologically current, as are the two full CSH sets in the MMRP. By contrast, other CSH sets—including those at home station, those at the RTS-Med, and those stored at SIAD—have not been modernized in at least five years. Moreover, none of the equipment stored at SIAD is utilized either for training or missions—or at least has not been in a very long time.

Because the CSH equipment in APS and MMRP is technologically current and in good condition, we focused our efforts to develop an equipping and maintenance strategy to improve the situation in the other pools of equipment. For home station equipment sets, we recommend that the Army move to new designs that are better aligned with training needs, with different designs for active and reserve component CSHs.

We recommend that the Army regularly upgrade these sets during the Reset phase of the ARFORGEN cycle (i.e., every three years for active CSHs and every five years for reserve CSHs).

For training sites, we recommend that the Army improve the currency of the equipment sets. We also recommend that it improve the flexibility of the sites to tailor the equipment configurations for training exercises to the needs of specific CSHs. Flexibility might be enhanced by leasing some medical equipment. For example, some of the medical equipment stored in APS or MMRP, which might not be used at all before being superseded in the Army's inventory by newer models, might be considered for lease.

For centralized assets at SIAD (other than MMRP), we recommend that the Army permit CSHs to share these assets rather than have a one-to-one correspondence between home station equipment sets and these partial “balance” sets at SIAD. Balance sets provide CSHs with the option of deploying with their home station equipment. To implement this aspect of the recommendation, the Army would need to address how CSHs would report their readiness when some of their MTOE (Modified Table of Equipment) is represented by shared equipment residing in a centralized asset pool. In conjunction, the Army should then reduce the number of balance sets, improving the condition and currency of the remaining sets, and change what equipment is in each set in accordance with the associated recommended changes in home station sets.

Overall, we recommend an equipping and maintenance strategy that would result in fewer, but regularly modernized, full hospital sets systemwide, resulting in less total medical equipment: the total equipment replacement cost at today's prices would decrease from approximately $1 billion to about $740 million, more than a one-quarter reduction (see Figure 1). A reduced inventory of medical equipment would reduce maintenance and upgrade costs, making it easier for the Army to ensure that CSH equipment is well maintained and state of the art. Nevertheless, the overarching intent of the recommended strategy is to improve training and deployed capabilities, not reduce costs. 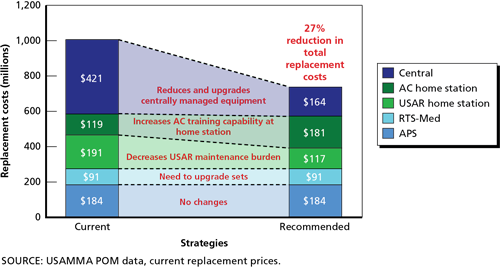 Because the recommended equipping and maintenance strategy would represent a radical departure from the current strategy in many respects, it needs to be vetted with stakeholders in the operations, maintenance, clinical, and training communities, and they should be included in efforts to refine and test the strategy. Thus, it would be prudent for the Army to begin moving toward the new strategy by fielding the new home station equipment designs at a few active and reserve CSHs, and then evaluating their performance in terms of the mission, maintenance, training, and manning effects of the designs. In conjunction, the Army should begin to reduce the number of balances in the Hospital Optimization and Standardization Program (HOSP) and Reserve Component Hospital Decrement (RCHD) programs at SIAD.

The Army should survey CSH commanders to gain a detailed and updated understanding of what training products and services they would like to be able to obtain from the RTS-Med. Under the new strategy, the reserve CSHs may have a need to expand their reliance on RTS-Med and MTTs (Mobile Training Teams). The Army should address the desire of CSH commanders, expressed in focus groups, to have the medical equipment in the training base upgraded to current generation, and it should anticipate a call for increased flexibility to tailor the training sites to mirror the equipment and facilities that deploying CSHs will encounter in deployed operations.

To improve its flexibility to configure training sites, the Army should explore leasing as a means of permitting the RTS-Med to acquire equipment temporarily for training when the item is not part of the MTOE but is being used by CSHs in theater. The Army should further investigate leasing high-cost medical equipment with a short technological lifespan for centralized training and in pools that have a lower chance of deployment.

The recommended equipping and maintenance strategy would substantially reduce the cost of equipping and maintaining the Army's CSHs, while providing them with equipment that is newer and in better condition on average than what they have now. Additionally, further exploring into how RTS-Med, MTTs, and leasing could be leveraged could offer further opportunities.