This perspective examines the institutional and technical obstacles to the commercialization of advanced nuclear reactors for electrical power generation in the United States, evaluation of non--light-water reactor nuclear plants, and investing the time and resources needed to establish the operational and safety characteristics of these technologies. 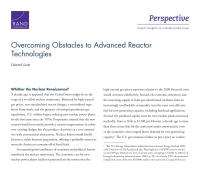 This perspective examines the institutional and technical obstacles to the commercialization of advanced nuclear reactors for electrical power generation in the United States. The nuclear renaissance that seemed imminent ten years ago has failed to materialize, in considerable part because of the failure of large light-water reactors (LWRs) to achieve the envisioned improvement in capital costs. If nuclear fission is to play a substantial role in the future of the U.S. energy supply, a more cost-effective type of nuclear power plant must be commercialized. This piece examines the underlying technical reasons LWRs require expensive engineered safety systems to protect the public. It then explores the institutional barriers that make it difficult for the U.S. Nuclear Regulatory Commission to evaluate non-LWR nuclear plants and discourage the U.S. Department of Energy and industry from investing the time and resources needed to establish the operational and safety characteristics of these technologies. Finally, it provides an overview of several candidate reactor designs that might offer alternatives to the current technological paradigm and outlines steps policymakers can take to overcome the barriers to the commercialization of next-generation nuclear reactors.

U.S. Reactors, the Fuel They Use, and U.S. Attitudes Toward Nuclear Energy Drive the Need for Costly Safety Engineering and Inhibit Innovation of Alternative Reactor Technologies

Some Possible Alternatives to Current Light-Water Reactors Have Not Been, and Might Never Be, Commercialized in the United States

The research reported here was conducted as part of the Stanton Nuclear Security Fellows Program at the RAND Corporation.