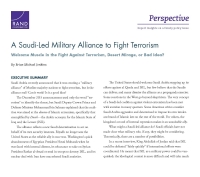 Welcome Muscle in the Fight Against Terrorism, Desert Mirage, or Bad Idea?

In December 2015, Saudi Arabia announced that it was creating a military alliance of Muslim-majority nations to fight terrorism. In this RAND perspective, Brian Michael Jenkins explores the reasons behind the announcement, the likelihood of such an alliance being realized, what it might mean for the Middle East if it is, and how the United States should respond to the initiative. Jenkins concludes that there are both potential benefits and negative consequences of a Saudi-led alliance against terrorism and that, though the alliance's prospects in the near term are questionable, it would be a mistake for the United States to ignore the initiative. To help Saudi Arabia identify and achieve missions that would be most useful for shared goals, it might be useful for officials in Washington to create a small task force charged specifically with exploring the opportunities presented by the Saudi initiative.

This RAND-Initiated research was conducted within the RAND National Security Research Division.