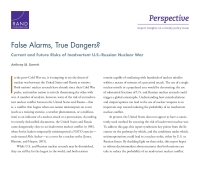 In the post–Cold War era, it is tempting to see the threat of nuclear war between the United States and Russia as remote: Both nations' nuclear arsenals have shrunk since their Cold War peaks, and neither nation is actively threatening the other with war. A number of analysts, however, warn of the risk of an inadvertent nuclear conflict between the United States and Russia — that is, a conflict that begins when one nation misinterprets an event (such as a training exercise, a weather phenomenon, or a malfunction) as an indicator of a nuclear attack or a provocation.

Understanding how miscalculations and misperceptions can lead to the use of nuclear weapons is an important step toward reducing the probability of an inadvertent nuclear conflict. At present, the United States does not appear to have a consistently used method for assessing the risk of inadvertent nuclear war. To address this gap, this report synthesizes key points from the literature on the pathways by which, and the conditions under which, misinterpretations could lead to a nuclear strike, either by U.S. or Russian forces. By shedding light on these risks, this report hopes to inform decisionmakers about measures that both nations can take to reduce the probability of an inadvertent nuclear conflict.

The research reported here was conducted as part of the Stanton Nuclear Security Fellows Program at the RAND Corporation.