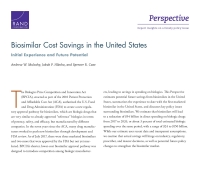 The Biologics Price Competition and Innovation Act (BPCIA), enacted as part of the 2010 Patient Protection and Affordable Care Act (ACA), authorized the U.S. Food and Drug Administration (FDA) to create a new regulatory approval pathway for biosimilars, which are biologic drugs that are very similar to already approved "reference" biologics in terms of potency, safety, and efficacy, but are manufactured by different companies. In the seven years since the ACA, many drug manufacturers worked to push new biosimilars through development and FDA review. As of July 2017, there were three marketed biosimilars and two more that were approved by the FDA but not yet marketed. BPCIA's shorter, lower-cost biosimilar approval pathway was designed to introduce competition among biologic manufacturers.

This Perspective estimates potential future savings from biosimilars in the United States, summarizes the experience to date with the first marketed biosimilar in the United States, and discusses key policy issues surrounding biosimilars. We estimate that biosimilars will reduce direct spending on biologic drugs by $54 billion from 2017 to 2026, or about 3 percent of total estimated biologic spending over the same period, with a range of $24 to $150 billion. While our estimate uses recent data and transparent assumptions, we caution that actual savings will hinge on industry and regulatory decisions as well as potential policy changes to strengthen the biosimilar market.

The Cost Savings Potential of Biosimilars

The Future of the Biosimilars Market

The Beneficiaries of Cost Savings

The research described in this report was sponsored by Sandoz, a Novartis Company, and conducted within RAND Health.