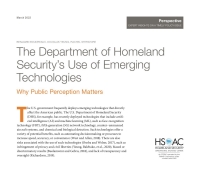 The Department of Homeland Security's Use of Emerging Technologies

The U.S. government frequently deploys emerging technologies that directly affect the American public. The U.S. Department of Homeland Security (DHS), for example, has recently deployed technologies that include artificial intelligence and machine learning, such as face-recognition technology, fifth-generation network technology, counter–unmanned aircraft systems, and chemical and biological detection. Such technologies offer a variety of potential benefits; there are also risks associated with the use of such technologies.

Public perception is an essential element that can help identify risks and benefits of the use of technology and can inform multiple stages of the technology acquisition and deployment life cycle. The attention that results when the government fails to account for public perceptions in technology deployments has consequences both for the intended technology use and for government personnel who work with the public; this lack of public trust has implications for homeland security. Public perception could affect DHS implementation of emerging technologies.

A variety of important stakeholders, including members of Congress, technology companies, state and local government, and civil liberties advocates, have raised concerns about DHS's use of emerging technology. However, the extent to which the public shares these concerns or supports DHS use is unclear.

This research was sponsored by the DHS Science and Technology Directorate and conducted within the Acquisition and Development Program of the Homeland Security Operational Analysis Center (HSOAC).