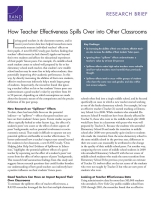 How Teacher Effectiveness Spills Over into Other Classrooms

Having good teachers in the classroom matters, and in recent years better data have helped researchers more accurately measure individual teachers' effects on their pupils. A novel RAND study goes further, finding that teachers' effectiveness (or lack thereof) ripples out beyond their own students and affects the educational experiences of their pupils' future peers. For example, if a middle school math student comes to school well prepared by his or her elementary school math teacher, that student's new middle school teacher may be more free to help other students, thus potentially improving their academic performance. In this way, by directly increasing the abilities of their own students, effective teachers may indirectly help a much larger group of students. Importantly, the researcher found that ignoring a teacher's effect on his or her students' future peers can underestimate a good teacher's value by anywhere from 30 to 90 percent, depending on which assumptions are made about the dynamic nature of the comparisons and the precise definition of the peer group.

Good Teachers Can Have an Impact Beyond Their Own Classrooms

Using administrative data for more than 585,000 students who attended a New York City public middle school from 1990 through 2010, the researcher found that an effective teacher — defined as a teacher with a high "value-added" (VA) score, based on the teacher's impact on students' test results — does have a positive impact on her students' future peers. That is, the researcher found that the positive effect that a good teacher has on her students does in fact spill over to affect students who later share a class with the teacher's students. This spillover effect was both statistically and economically significant: The researcher found that an increase in the average quality of a student's peers' previous teachers could affect that student's test scores by about 50 percent as much as a similar increase in the student's current teacher's quality would.

Importantly, the researcher found that ignoring a teacher's effect on her students' future peers can underestimate a good teacher's value by anywhere from 30 to 90 percent, depending on multiple factors. The researcher also considered how peer spillover effects might lead to inaccurate VA estimates. For example, if half of a teacher's students previously had an ineffective teacher, those poorly prepared students could have a negative impact — both in terms of peer-to-peer interactions and the overall classroom dynamic — on the other half of the class.

Since current VA estimates do not take into account spillover effects, this negative impact would be misattributed to the current teacher and would thus affect the teacher's VA estimate. To address this potential misattribution, the researcher developed an innovative approach that simultaneously estimates each teacher's VA and the degree to which effects (whether positive or negative) spill over to affect students' future peers. While accounting for the spillovers did not lead to a large change in the ranking of the teachers in this study — in part because every teacher was impacted by spillovers from past teachers in a similar way — it does suggest that high-VA teachers are more valuable (and low-VA teachers more harmful) than previously thought.

The findings from this study also shed light on the mechanisms behind peer spillover effects. The researcher noted that spillovers occurred mainly within subjects, rather than across subjects; that is, a student's English test score depends on the quality of the student's peers' previous teachers' English VAs, but not on the quality of the student's peers' previous teachers' math VAs. The spillovers also tended to occur mainly within groups of students who were the same race and gender, as opposed to occurring within the entire grade. These findings illustrate the crucial importance of social networks in disseminating spillover effects. They also suggest that peer-to-peer interactions may play a more important role in spillover effects than do classroom dynamics.

The conversation about teacher effectiveness is almost always about how teachers directly affect their own students; this study makes a strong case for expanding the conversation to also include the ways in which teachers can indirectly affect their students' future peers, and the impact that this can have not only on student test scores but also on teacher VA estimates. Ignoring spillover effects — and potentially underestimating a good teacher's VA by between 30 and 90 percent — could have important consequences for policymakers, especially when conducting cost-benefit analyses of teacher improvement programs.

Going forward, it will be important to explore how teachers differ in the degree to which the impact they make on their own students spills over to their students' future peers. One potential approach would be to gain a better sense of what is generating the spillover effects on future peers. This could help researchers identify other non–test score measures of teacher quality that, in turn, could help predict which teachers are most likely to have large indirect effects. Understanding the mechanisms behind peer spillover effects would also help researchers and policymakers predict whether other education interventions could also generate large spillovers — or whether there is something unique about the way that teachers improve their students' learning. The fact that spillovers occur within groups of students who are the same race and gender also highlights how important it is to understand the social network within a school, and how education interventions affect these relationships. Without a clear understanding of these issues, it is difficult to know which policies will generate spillover effects, and who exactly will be affected.

Yet even without this additional research, the message of this study is clear: Effective teachers are a benefit not just for their own students but also for their students' future peers.