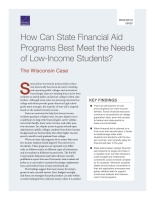 How Can State Financial Aid Best Meet the Needs of Low-Income Students?

State policies to promote postsecondary education historically have been devoted to funding and operating public colleges and universities. Increasingly, states are funding direct aid to their residents to attend public and private colleges within state borders. Although some states are pursuing universal free college and others provide grants based on high school grade-point averages, the majority of state aid is targeted based on the student's family income.

States are motivated to help their lowest-income residents graduate at higher rates, because degrees serve as pathways to long-term financial gain, career satisfaction, better health, lower rates of crime, and other positive outcomes. Yet, despite access to grant aid and open admissions to public colleges, students from lower-income backgrounds are far less likely than their higher-income peers to enroll in and graduate from college.

What can state aid programs do to assure that more low-income students finish degrees? The answer is in the details. These programs are operated very differently in different states, at different types of institutions, and for students at different income levels. The RAND Corporation's Education and Labor division recently published a report that uses Wisconsin's state student aid policy as a case study to examine the design, implementation, and evidence base of state need-based aid.

The findings suggest that more money for aid programs is only a partial answer. First, budgets are tight, and there are strategies that policymakers can take within current funding levels to allocate money where it is needed most. In the Wisconsin context, the need appears greatest for the students with the lowest incomes, even though they already receive the largest amount of federal grants. Second, increasing funding is important not only for individuals who currently receive aid, but for expanding the number of individuals who can receive it, and for making funding more reliable. In Wisconsin, a lack of money led to rationing of aid, increasing the complexity of the aid application process. Third, more money is difficult to advocate for without evidence on effectiveness, which requires new efforts to link data, such as the one undertaken for this report.

Who Isn't Finishing? The Wisconsin Case

Despite Wisconsin's achievements in college access and success overall, there are disparities in college attainment. The report compares student outcomes using the characteristics of students and schools, with a focus on family income. The report found consistent gaps in college attainment by income across many different contexts. This part of the analysis used information available through the Wisconsin Department of Public Instruction (DPI) describing the characteristics and experiences of students who graduated from public high schools and went on to college in the following year, about 60 percent of the 65,000 students graduating each year between 2008 and 2012. Researchers defined student poverty as any student having received free or reduced-price school lunch, and tracked the completion of any type of college degree during the first six years after leaving high school using data from the National Student Clearinghouse.

As an example of the trends uncovered, Figure 1 shows that students who took the ACT college entrance examination and who scored high enough to be considered college-ready tended to complete college degrees at higher rates. But within each group of students, the six-year graduation rates for students with lower family incomes were at least 15 percentage points lower than the rates of their high-income peers. Considering differences by race and ethnicity, nonpoor white students had the highest rate of earning a college degree within six years of leaving high school. Poor white students were 19 percentage points less likely to complete a degree. Black and Hispanic students, relatively small minorities in the Wisconsin population, had lower college attainment rates, even when they came from higher-income families.

Lower-income students are eligible for federal and state aid, so persistent gaps in college completion suggest that public aid programs have not fully met their goals of promoting equity and increasing degree completion among the poor. But understanding the effects of aid programs requires knowing which poor students applied for and received aid.

Researchers expanded the analysis to include information from financial aid records, which meant students starting college later in life, not necessarily right out of high school, were included. Researchers defined three different income groups based on the Expected Family Contribution (EFC): those with high incomes not eligible for federal need-based aid, those who were eligible for some need-based aid, and those who were eligible for the maximum amount of need-based aid. This analysis included roughly 390,000 Wisconsin residents who filed the Free Application for Federal Student Aid (FAFSA) for the first time in a five-year period.

Figure 2 shows gaps between rich and poor students in attaining college degrees. Students who began college at younger ages (either just out of high school, or under 24 and considered dependent on their parents for aid purposes) had higher graduation rates, but within each group, the students with lower family incomes had lower rates. Graduation rates also differed across the different types of colleges and universities. Students who started at one of the four-year colleges or universities had the highest rates of completion. Still, students who received federal aid via the Pell Grant had the lowest rates of completion, suggesting disadvantages that state aid could potentially address.

Similar to the federal Pell Grant, the Wisconsin Grant is designed to offset students' lack of resources with grant aid. Both programs calculate financial eligibility using information from the FAFSA. Unlike the Pell Grant, state grants typically have more-limited budgets and cannot serve every financially eligible student. In Wisconsin and several other states, this means that aid applications are processed on a first-come first-served basis, based on when the student files the FAFSA. During the period of this study in the early 2010s, students could file the FAFSA starting in January before the school year began in the fall and could continue to file any time during the school year.

The rationing process tends to make college more expensive for students who make their decision to attend later in the year. By the time the fall semester begins, the financial aid available in that year has run out. The unpredictability of when aid will run out makes it harder for families to predict what college will cost. Until this analysis, it was not clear which types of students were affected by the first-come first-served policy.

Using data on when FAFSA applications were received, researchers found that students tended to file later and risked losing out on aid when they were in two key groups: those beginning college at older ages, and those with the lowest levels of income. Figure 3 and Figure 4 show differences in the makeup of the applicant pool based on when those applicants filed the FAFSA. The figures focus on applicants to four-year colleges and universities. In Figure 3, the independent students (those over 24 years old or otherwise independent from their families) made up a larger proportion of later filers. Figure 4 shows that the students with high incomes made up a larger proportion of earlier filers, even though their incomes were too high to qualify for state aid. The middle-income group made up a consistent proportion throughout the year. The lowest-income group represented a larger proportion of later filers.

These trends in timing of FAFSA filing by age and income were far less evident at technical colleges and tribal colleges (not shown). Overall, students attending two-year institutions filed later, but because Wisconsin Grant funding is allocated separately by sector, the two-year students did not lose aid to students attending four-year colleges, who filed earlier.

More details are available in the report and in an accompanying technical article about how delivery of Wisconsin Grant aid affected student outcomes. In particular, the report delves into the FAFSA process for determining financial need, and how Wisconsin makes use of the EFC.

This project demonstrates the value of data collection and analysis in partnership with state financial aid offices. We uncovered trends in college attendance and aid applications that were not evident from aggregate reporting. The analysis provides key information for policy and practice, summarized in the Key Findings.